The solemn ceremony took place on the territory of the U.S. Coast Guard "Baltimore" and was attended by Ukrainian President President Poroshenko and his wife Maryna Poroshenko. 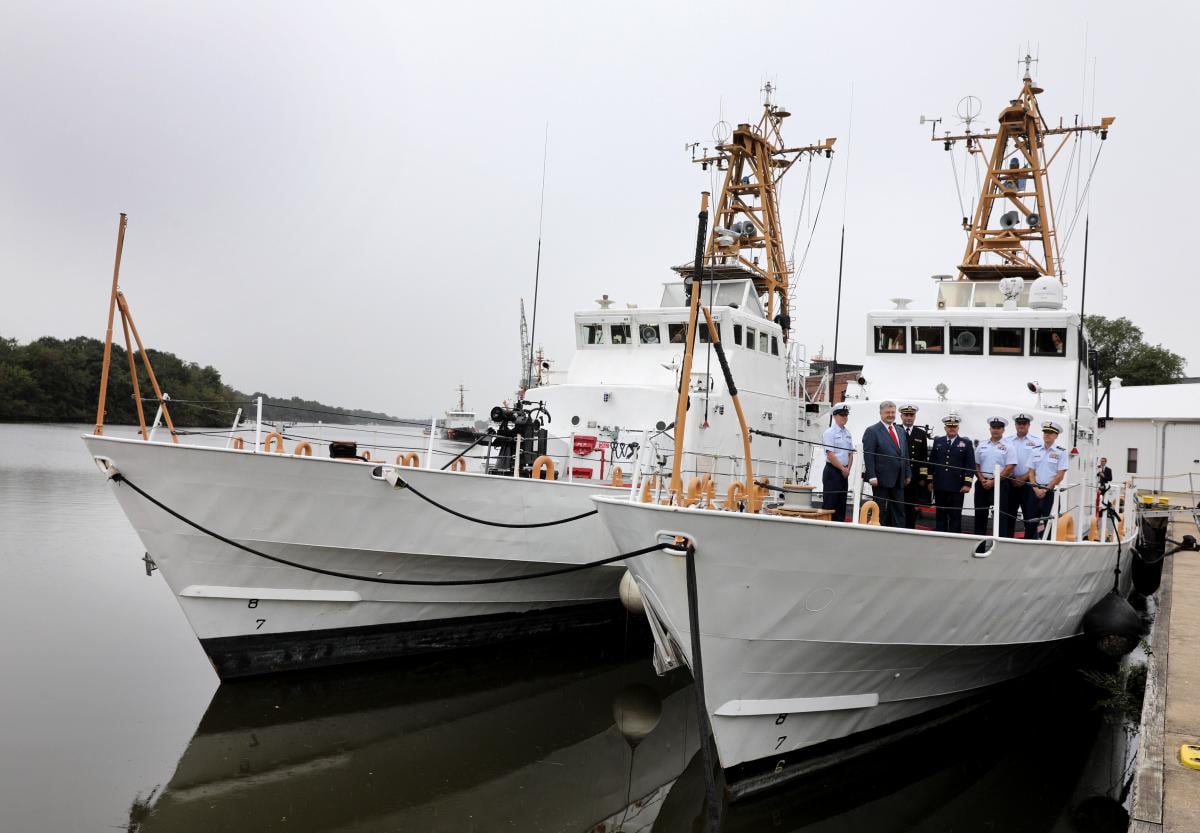 The United States has handed over two Island-class patrol boats to the Naval Forces of Ukraine.

The solemn ceremony took place on the territory of the U.S. Coast Guard "Baltimore" and was attended by Ukrainian President President Poroshenko and his wife Maryna Poroshenko, the president's press service reports.

The certificates on transfer of equipment in the presence of the president have been signed by Vice Admiral of the Coast Guard of the USA Michael Mcallister and Commander of the Naval Forces of Ukraine Ihor Voronchenko.

"It is a great privilege for me to be here, in Baltimore. In a place of a century-long traditions. In a place, where the naval might of the United States is maintained. It is my honor to salute the men and women, who serve in the United States Coast Guard. You are carrying out the greatest mission – protect the borders of the Homeland," Poroshenko said.

"This day marks another milestone in developing a strategic partnership between Ukraine and the United States," the president stressed.

He once again emphasized that the U.S. leadership, the president of the United States had once again proven to stand firmly on the guard of international law, to support a freedom-loving people in their quest for peace, democracy and independence.

"The first two 'Island' boats will become another brick to strengthen a naval alliance between the Ukrainian and American peoples," the president said, adding that the given assistance would be supplemented by the U.S. assistance for construction of Ukraine's Navy Command Center in Ochakiv.

"Today's event clearly shows that the Strategic Partnership between Ukraine and the United States is vibrant and productive," he stressed.

According to the head of state, this alliance is already deeply rooted in the annual Sea Breeze exercise co-hosted by Ukraine and the U.S. in the Black Sea. This July it was held for the 18th time with the participation of 17 nations.

Vice Admiral of the Coast Guard of the USA Michael Mcallister noted that over the past 20 years, the Coast Guard had provided 520 assets to 75 partners under the Excess Defense Articles (EDA) program. "The program provides mutually beneficial cooperation with all partners. Our international partners can swiftly improve maritime safety and defense capability. These transfers help secure a long-term international partnership that provides global maritime security," he said.

The Vice Admiral of the Coast Guard of the USA also emphasized: "I am convinced that these boats will also serve well in the hands of the Ukrainian Navy. In the hands of skilled sailors, such as U.S. Coast Guard and Ukrainian Navy, the Island-class motor boats have proven themselves to be versatile and efficient assets. Their teams have distinguished themselves in preventing illicit trafficking, emergency response, defense operations and rescue of people in the seas."

Mcallister also told that he had served as a commanding officer at one of those ships: "Coast Guard sailors love these ships."

"It is bittersweet to watch these cutters leave our service, we are proud to see them continue their service lives and remain relevant instruments of global maritime safety and security. We look forward to beginning the transfer process and working with our Ukrainian partners to deliver these outstanding cutters that have served the United States so well," the Vice Admiral of the Coast Guard of the USA noted.