The Ukrainian parliament and the government require more realism and responsibility for the implementation of the Association Agreement. 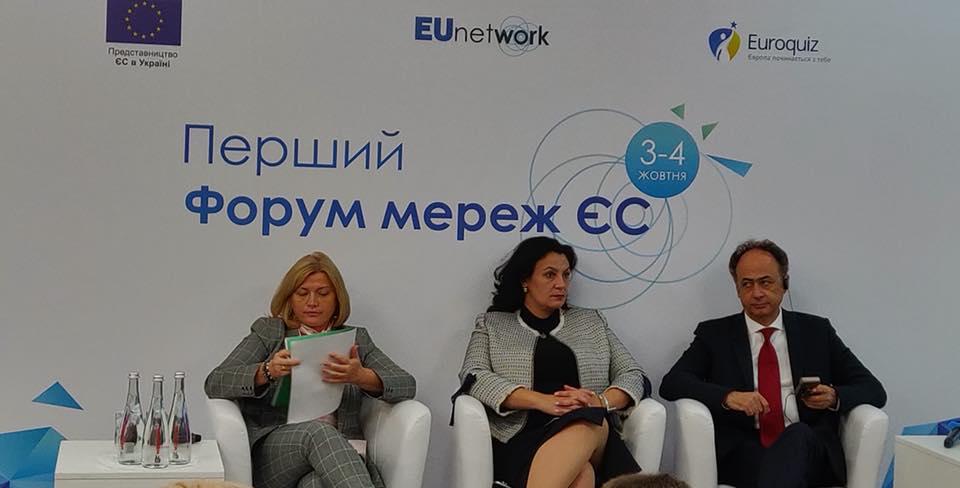 Ukraine's Representative in the humanitarian subgroup of the Trilateral Contact Group for the Donbas settlement, First Deputy Chair of the Verkhovna Rada Iryna Gerashchenko says the First Forum of EU Networks 2018 was held on Wednesday.

It is a platform that brings together over 250 public organizations working in various regions of Ukraine, in various integration projects: educational, educational, media, she wrote on Facebook.

She stressed the meeting was very interesting. She visited it together with head of the EU Delegation to Ukraine Hugues Mingarelli and Ukrainian Deputy Prime Minister for European and Euro-Atlantic Integration of Ukraine Ivanna Klympush-Tsintsadze.

"In my speech, I noted that 74% of Ukrainians support European integration - and this is wonderful. And I like the trend that MPs are competing for who is a greater supporter of European integration, while presidential candidates are convincing the public who will lead Ukraine to the EU and NATO, and plagiarize each other's ideas of billboards. Let everyone agitate for NATO and the EU. But at the same time, the key is to show commitment to the course by actions," she wrote.

Gerashchenko expressed the conviction that one of the key challenges of European integration is the possibility of revanchism and populism.

"Our parliament and the government need more realism and responsibility for the implementation of the Association Agreement. Now, out of 57 laws placed in the Roadmap for legislative support for the implementation of the Association Agreement between Ukraine and the EU, seven have been passed as a whole, nine have been passed in first reading, four have been taken into account when considering other bills. They need to focus on the revision, improvement and adoption of bills," she added.