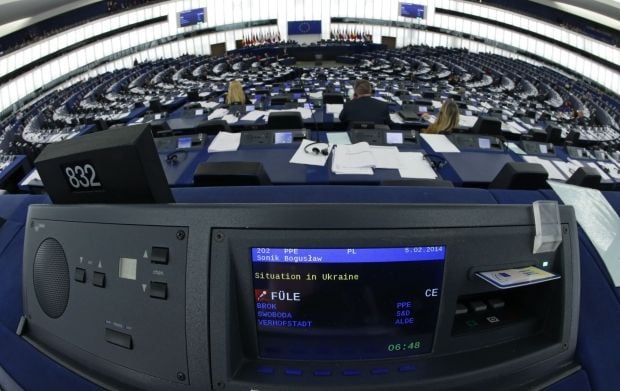 The resolution was passed with a simple majority of votes of MEPs, according to an UNIAN correspondent.

The resolution points out that on July 16, the Council of the EU lifted the embargo on arms supplies to Ukraine.

"Thus, there are now no objections, including legal restrictions, for Member States to provide defensive arms to Ukraine, which could be based on a ‘lend-lease scheme,” the resolution reads.

The European Parliament resolution also said that the EU should consider ways of providing support to Ukraine in strengthening its defense capacities and protecting its external borders, based on the experience of transforming the armed forces of former Warsaw Pact countries (that are now members of the EU), and supports the ongoing delivery of non-lethal equipment

The European Parliament also noted the adoption by Ukraine of a law on the abolishment of its non-aligned status, "recognizing Ukraine's right to freely make its own choices."

The European Parliament supported the position of Ukrainian President Petro Poroshenko that currently Ukraine has to urgently focus on political, economic and social reforms, and that NATO membership, is an issue that should be put to a national referendum later.

The European Parliament in its resolution stressed that development of close relations between Ukraine and the EU is not related to the issue of [Ukraine’s] NATO membership.

In addition, the European Parliament welcomes the decision of France to suspend transfer of two Mistral helicopter carriers to Russia, calling upon all Member States to adhere to this line in relation to exports that are not subject to EU sanctions, particularly when it concerns the transfer of arms and dual-use technologies.