The international community, in turn, condemned the illegal "local elections" in Donbas. 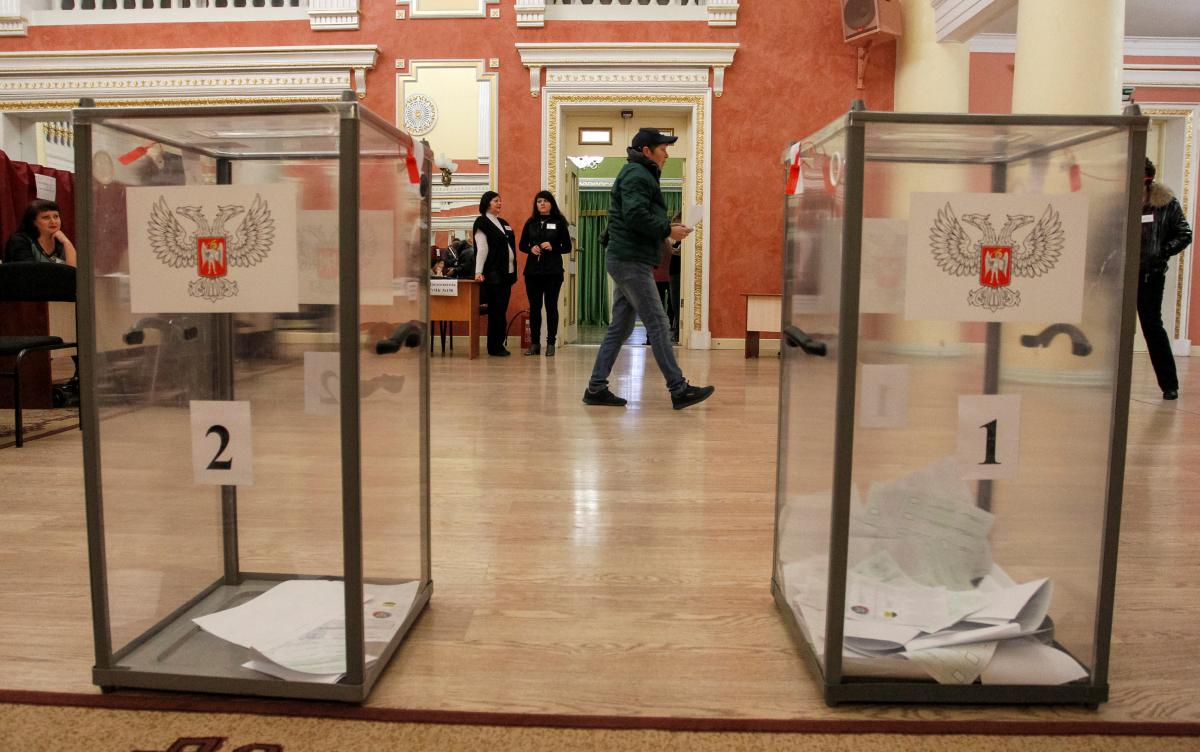 "Chairperson" of the so-called "LPR Central Election Commission" Yelena Kravchenko has announced that voter turnout amid the "voting to elect the head and members of 'LPR's People's Council'" was allegedly 77%, according to Russia's Interfax news agency.

In her words, minor violations that did not affect the voting process were recorded during the work of the "polling stations."

Vote counting started as soon as the polls were closed, she said.

Pozdnyakova claims, "There were no significant violations during the voting, and only an attempt to attack an election commission member was recorded at a 'polling station.'"

Dmytro Tymchuk, the coordinator of the Ukrainian-based Information Resistance OSINT community, gave details about tricks used by Russian propagandists to guarantee "unprecedentedly high turnout rates" during the sham "elections" in the occupied east of Ukraine.

Pending the "voting day," some Donbas-based Internet portals conducted polls as for local voters' plans to go to the "polling stations," Tymchuk said.

Read alsoUkraine's MFA : Outcome of sham 'elections' in Russian-occupied Donbas will be null and void

"A quick poll conducted from October 29 to November 2 among local residents in the 'LPR' showed that the situation for the occupying administrations there was not much better; an average 'turnout' rate should be 23% (22% in Luhansk, 26% in the Sverdlovsk district, and no more than 18% in the rural areas; residents of the Krasnodon district showed their greatest readiness to vote – 28%). Only God and psychiatrists know what 'activity' and 'high turnout' Russian senators and collaborating officials are talking about," Tymchuk said.

The Information Resistance community says that in addition to various kinds of "incentives" (such as selling products outside the "polling stations" at ultra-low prices), the invaders invented another know-how. "In particular, state employees pushed by kicks to the 'polling stations' were ordered to come exactly from 14:00 to 15:00 (by the way, teachers made their students' parents come within the same timeslot). This is necessary for a 'picture' to be shown by the Russian media – exactly that period of 'extraordinary activity at the polling stations' in the 'LPR' and the 'DPR' is now being broadcast by Russian TV. This is the type of the 'elections' made up by Moscow," Tymchuk said.

"DPR" and "LPR" authorities were trying to do their best to attract as many voters as possible. In particular, according to Radio Free Europe / Radio Liberty, street stands in the occupied city of Donetsk, the largest urban center controlled by Russian-backed separatists in eastern Ukraine, were selling cut-price food and offering the chance to win prizes as an apparent incentive to vote.

Earlier, Chief of the SBU Security Service of Ukraine Vasyl Hrytsak said that the outcome of the bogus "elections" could have easily been predicted, as it had been "drawn up by the presidential administration of Russia."

The international community, in turn, condemned the illegal "local elections" in Donbas.

The European Union, the United States and Japan deem the "elections" to be a violation of the Minsk agreements. Ukraine's Ministry of Foreign Affairs said that the fake "voting" in Donbas would not be recognized by the Ukrainian authorities and the international community.