‘Normandy four’ call for withdrawal of heavy weapons in Donbas 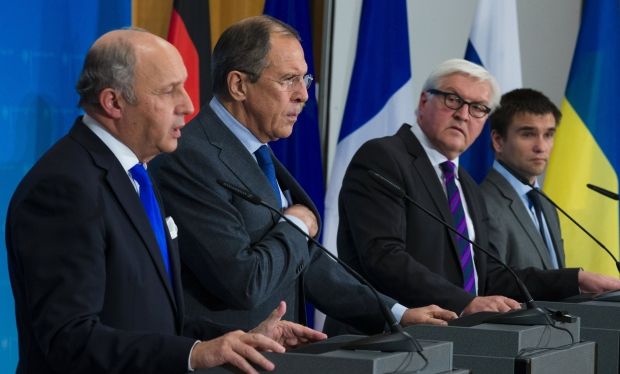 This was reported in a joint statement the foreign ministers issued after their meeting in Berlin on January 21, according to UNIAN correspondent.

In particular, the ministers expressed serious concerns that their call for adherence to the "silence regime” has not been followed, and that, on the contrary, the hostilities in the Donbas have escalated significantly, causing the loss of the lives of a large number of people, including civilians.

"This must stop immediately and the ‘regime of silence’ is to be restored," the ministers said in their statement.

They called on all the parties to fully comply with this demand.

"The ministers call on all the parties involved to cease hostilities and withdraw heavy weapons in accordance with the line of contact as set out in the Annex to Minsk Memorandum dated September 19," the statement reads.

In this context, progress in this process must be monitored and supported by a special monitoring mission of the OSCE directly on the ground.

The ministers reiterated that tangible progress on the full implementation of the Minsk agreements must be achieved ahead of a scheduled “Normandy format” meeting of leaders in Astana, in particular, by creating appropriate conditions for an effective ceasefire, agreement on the terms of humanitarian aid delivery, and continuation of the release of hostages.

"The ministers reaffirm their support for the tripartite contact group and call on all signatories of the Minsk agreements to meet in the coming days to implement the provisions of the ceasefire and the withdrawal of heavy weapons, in accordance with the line of contact as agreed in Minsk on September 19, and to create conditions for full implementation of the Minsk agreements," the statement reads.

The Ministers also urged the tripartite contact group to set up working groups on “relevant aspects of the Minsk agreements."