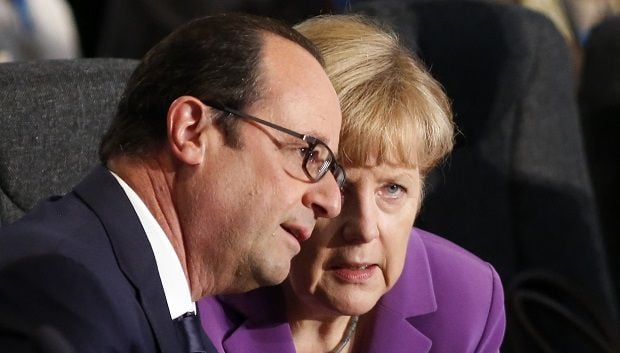 "The measure of success of Angela Merkel and Francois Hollande remains to be respect for the Minsk Protocol and effective implementation of each of the twelve items, including the withdrawal of Russian troops from Ukraine and termination of the arms supplies to separatists" Le Figaro wrote, referring to its own diplomatic sources.

"But that is not all. According to preliminary information, the Franco-German plan on conflict settlement should ensure the neutrality of Ukraine and a ‘federalization solution’ that will freeze the conflict in the east," the newspaper wrote.

German newspaper Süddeutsche Zeitung earlier wrote that there was the possibility of concessions being made to the Russian-backed militants, including territorial ones.

However, the German government denied this.

"Territorial issues are not the subject of negotiations between Poroshenko, Hollande and Merkel," a representative of the German government said.

At the same time, according to Le Figaro, the fact that Merkel has agreed to negotiate, "gives reason for optimism," since the Astana meeting in Normandy format, which was scheduled on January 15 and then cancelled, was initiated by the German chancellor, according to media reports.

"France insisted that the meeting be held in any case, and maintaining a dialogue with Russia is necessary even in the absence of results," the publication reported, quoting its sources.

According to French newspaper, the Europeans are concerned that the issue of arms supplies to Ukraine is becoming increasingly important, thus strengthening the role of the United States.

"The European Union is interested in establishing itself as Kremlin’s sole interlocutor," a senior EU official said in comments to the publication.

Earlier, it was reported that Putin had proposed to Merkel and Hollande to create a new Transnistria in Ukraine.

At the same time, the Deputy Head of the Presidential Administration of Ukraine Valeriy Chaly said that the Minsk agreements was the basis of the talks held between Poroshenko, Merkel and Hollande on Thursday, and not the plan presented by Putin.