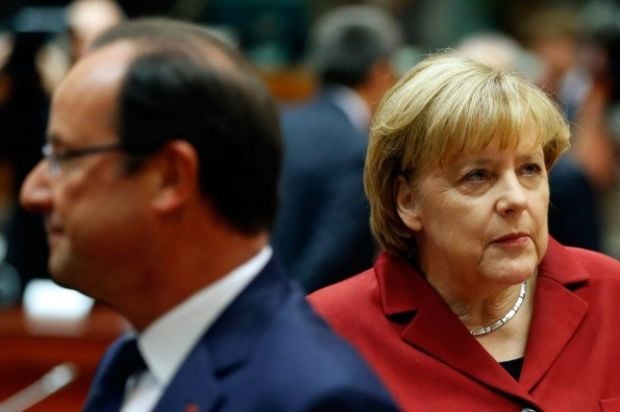 According to a Western official, this week Putin sent a secret letter to Hollande and Merkel demanding more territory and autonomy for the militants. French and German leaders rejected this proposal and proposed Friday's visit to Moscow. According to the newspaper, the Western leaders are flying to Moscow with counter-proposals.

On the eve of the visit to Kyiv on Thursday, Hollande and Merkel also said that they would visit Moscow. According to the French president, the leaders had decided to propose a new initiative. He added that he would make a new proposal which would be based on the territorial integrity of Ukraine. Hollande also said that the visit to Moscow would be aimed at drafting the new text of an agreement that would be acceptable to all parties.

"The leaders of the three countries will discuss what they can do for the early termination of the civil war in the south-east of Ukraine," Russian president's press secretary Dmitriy Peskov said.

"The parties discussed absolutely new proposals to resolve the crisis. No document from Putin was the basis for the negotiations," Presidential Administration Deputy Head Valeriy Chaliy said after the talks in Kyiv.

The talks in Kyiv lasted more than five hours. The parties demanded an immediate ceasefire, the withdrawal of foreign troops, withdrawal of heavy equipment and weapons, the border closure and the release of all the hostages, including Ukrainian pilot Nadia Savchenko.

As reported earlier, a meeting between Ukrainian President Petro Poroshenko and U.S. Secretary of State John Kerry was held earlier on Thursday.

Following the meeting, Kerry called the Russian aggression as the greatest threat to Ukraine and added that the United States would not “turn a blind eye” to the Russian tanks in the Donbas.

In addition, Kerry said that Merkel and Hollande had received some proposals from Putin, but did not specify their content. He added that the leaders of France and Germany saw the text of the proposals only on Thursday, and hadn’t had time to analyze it yet.