Ukraine's Ambassador to the Kingdom of the Netherlands Vsevolod Chentsov signed the document on behalf of the Ukrainian government. 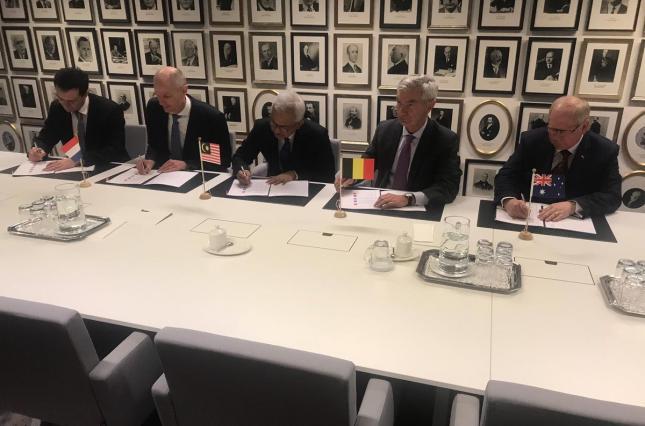 Ukraine, the Netherlands, Belgium, Australia, and Malaysia have signed a memorandum of understanding regarding the financial support for the prosecution of MH17, a Malaysian Boeing shot down by Russian-led forces in Donbas, eastern Ukraine, in summer 2014.

"The signatories arrange to jointly finance the proceedings connected with the prosecution in the Netherlands of those suspected of downing flight MH17 in light of the international nature of the tragedy and the goal of capturing the harm done to all victims and making the legal proceedings as accessible as possible to all next of kin of the victims," the memorandum reads.

Ukraine's Ambassador to the Kingdom of the Netherlands Vsevolod Chentsov signed the document on behalf of the Ukrainian government.

The expenditures for the public prosecutors, the judiciary and witness protection will be solely borne by the Netherlands and will not be subject to any oversight by the Financial Oversight Committee.

The memorandum became effective on the date of signature by the signatories on January 22.

It will remain in effect for five years and will be extended for successive two years periods, as deemed necessary by the signatories.

As was reported, the downing of Malaysia Airlines flight MH17 on July 17, 2014 in Donetsk region, Ukraine, resulted in the tragic loss of 298 lives, including 80 children.

If you see a spelling error on our site, select it and press Ctrl+Enter
Tags:memorandumMH17Netherlands