The two leaders also discussed prospects for the Donbas deployment of a comprehensive multinational peacekeeping mission under the UN auspices. 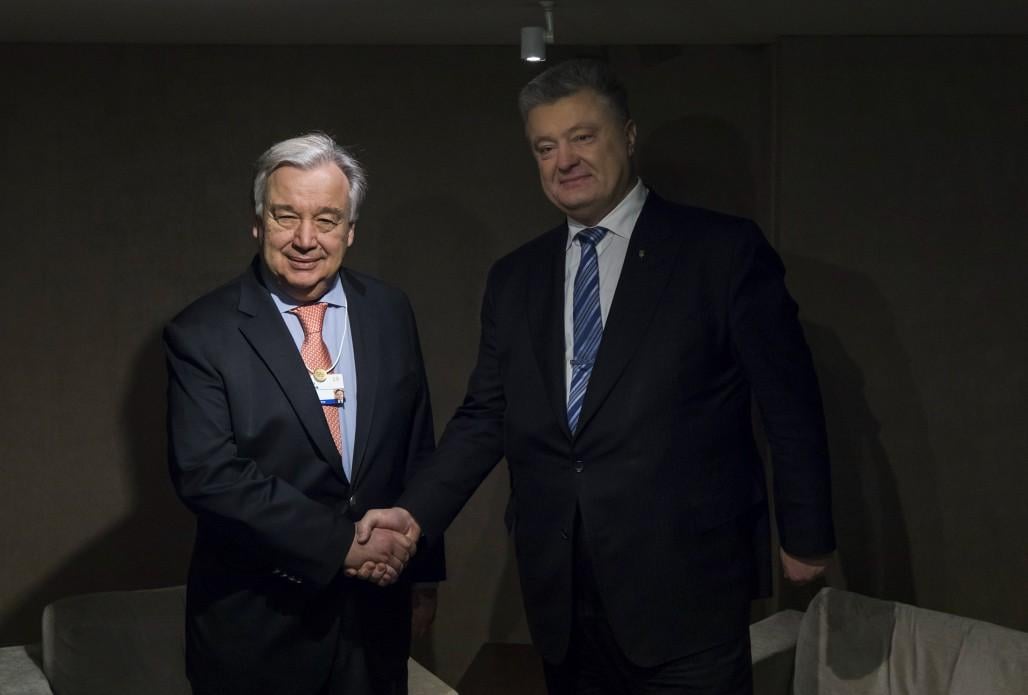 President of Ukraine Petro Poroshenko met with UN Secretary-General António Guterres on the sidelines of the World Economic Forum in Davos on Wednesday.

The interlocutors discussed in detail the latest developments in the temporarily occupied territories of Ukraine and the prospects for the Donbas deployment of a comprehensive multinational peacekeeping mission under the UN auspices, that's according to the presidential press service.

The UN secretary-general confirmed his willingness to pursue measures to provide humanitarian assistance to the internally displaced persons, as well as to the affected civilian population of Donbas.

Read alsoPoroshenko, Merkel agree on further pressure on Russia for release of all Ukrainian hostages

Petro Poroshenko and António Guterres discussed ways to ensure the fulfillment of respective UN GA resolutions on the situation with human rights in Crimea and demilitarization of the peninsula.

Particular attention was paid to the consequences of Russian aggression against Ukraine in the Black Sea and the Sea of Azov. The interlocutors underscored the need for the immediate release of Ukrainian sailors, vessels and ensuring free navigation in the Kerch Strait in accordance with international law.

The president of Ukraine and the United Nations secretary-general also discussed in detail the issue of the release of Ukrainian hostages illegally held in Russia and the provision of constant monitoring of the human rights situation in Crimea by the relevant international mechanisms.

If you see a spelling error on our site, select it and press Ctrl+Enter
Tags:RussiaPoroshenkoUnitedNationsRussianAggressionGuterresPOWsDavos