Obama and Poroshenko agree to work together after meeting in Minsk

Ukrainian President Petro Poroshenko and U.S. President Barack Obama approved the German-French peace initiative for the Donbas in a telephone conversation on the eve of the Minsk peace talks on Wednesday. 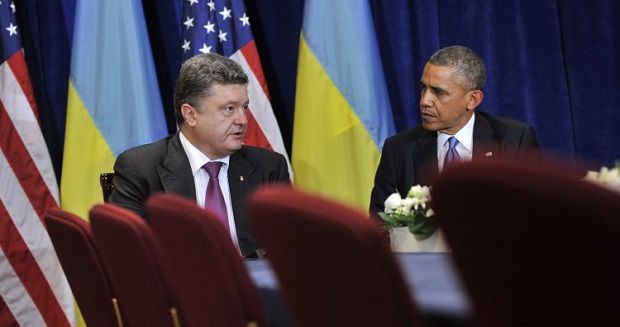 According to a White House statement, the presidents both stressed the need for Russia to comply with its obligations as set forth in the previous Minsk agreements, German broadcaster Deutsche Welle reports.

The presidents also agreed to closely coordinate their further actions after the “Normany format” talks in Minsk between the leaders of Ukraine, Russia, Germany and France.

The White House statement does not say whether the presidents discussed the issue of weapons supplies to Ukraine in their telephone conversation. However, Obama pledged that Washington would provide financial assistance to Ukraine.

The U.S. president expressed his regret over the loss of the lives of Ukrainian citizens and underlined U.S. support for the peace talks.

As UNIAN reported earlier, President Obama had a telephone conversation with Russian President Vladimir Putin, and advised him to take full advantage of the opportunity to achieve peace via the negotiations in Minsk.