Poroshenko: We are ready to declare martial law in Ukraine

The Ukrainian government is ready to declare martial law throughout Ukraine if there is an escalation of the conflict in the east, Ukrainian President Petro Poroshenko said on Wednesday during a government meeting with the heads of regional state administrations, according to an UNIAN correspondent. 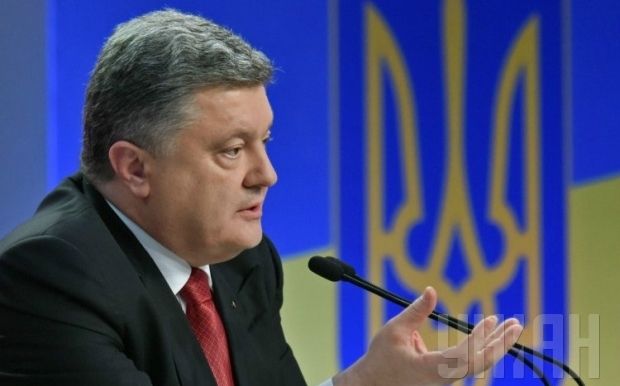 "I can say that I, the government and the Verkhovna Rada of Ukraine are ready to take a decision on the introduction of martial law throughout the country. In any case, I will not be late with this decision, if the irresponsible actions of the aggressor lead to a further escalation of the conflict,"  Poroshenko said.

There has been a further increase in fighting in the run-up to the talks, with Russian-backed militants pushing to take the Ukrainian-held town of Debaltseve, and Ukraine’s Azov volunteer battalion pushing back militant forces in the south of Donetsk region.

The talks may be further complicated by Tuesday’s rocket attack on Kramatorsk, which is well behind the front line of the fighting. According to the OSCE the rockets, which killed 16 people, were fired from the south-southeast, from the direction of militant-controlled parts of Ukraine. On Wednesday there was an attack on a bus station in Donetsk that left at least four people dead.

According to some reports from unofficial sources, agreement was reached between negotiators ahead of the Minsk summit on a ceasefire deal, including the pull-back of heavy weapons and international monitoring of the front line.

However, the Ukrainian side is said to still be insisting that it be allowed to regain control of the parts of Ukraine’s border with Russia where militants have seized control, to stem the flow of arms and troops into the Donbas from Russia.

That point may well scupper the talks, as Russian Foreign Minister Sergei Lavrov said on Wednesday that it was “unrealistic” for Kyiv to put this condition forward in the peace talks, according to Reuters.

Russia denies having any part in the conflict in Ukraine, which it describes as a “civil war.” However, there is mounting evidence that Moscow not only supplies the militants in Ukraine’s east with troops, arms and ammunition, but that it had a hand in starting the armed conflict in the first place.

Large numbers of photographs and videos taken in the conflict zone show weapons and weapons systems in the hands of the militants that could only have come from Russia, as they are issued only to the Russian armed forces.

In addition, Russian citizen Igor Girkin, who has the nom de guerre "Strelkov" and who was until August the "defense minister" of the Donetsk People's Republic militant organization, has said in magazine interviews that he and his team of Russian special operations soldiers were responsible for "pulling the trigger of war" in the Donbas.

Numerous videos from eastern Ukraine shot in April show teams of men in unmarked military uniforms taking over Ukrainian police and security service offices in military-style attacks in towns all over Donetsk and Luhansk regions.

Girkin also said that he was involved in the Russian invasion of Crimea, in which Russian soldiers posing as local militants in unmarked uniforms besieged and then took over critical Ukrainian security infrastructure and military bases in the peninsula.

Russia's President Putin at the time of the Russian invasion of Crimea denied that Russian troops were involved, but later, after the Ukrainian territory was annexed by Russia, admited that they had been.

Putin also presented medals to Russian troops who took part in that invasion.