Klimkin: Talks with Putin several times on point of breakdown

At several points the 17-hour talks in Minsk on ending the conflict in the Donbas were on the point of breakdown, Ukrainian Foreign Minister Pavlo Klimkin said on Friday when speaking in parliament, Ukrainian channel Espreso.TV has reported. 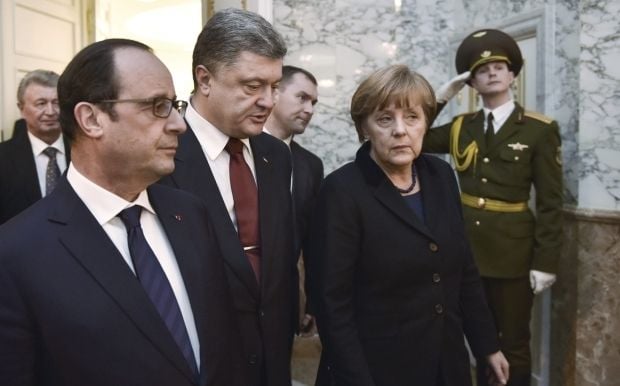 Klimkin said the talks were very difficult, and the Ukrainian, German and French delegations considered walking out of them on several occasions.

"Several times during the 17 hours of talks, we [Ukrainians] and our colleagues from Germany and France were ready to abandon the negotiations, but we managed to come to the agreements that were announced later," Klimkin said.

As UNIAN reported earlier, on February 12 the leaders of Ukraine, France, Russia and Germany agreed during Minsk talks on a complete ceasefire in the Donbas, a weapons withdrawal, and the exchange of prisoners.

However, the document was not signed by any of the “Normandy Four” leaders, named so because they first met in such a format in Normandy, France, in June last year.

Instead, the document was signed by a representative of the OSCE, a former Ukrainian president, the Russian ambassador to Ukraine, and two leaders of militant organizations in the east of Ukraine.