Evidence uncovered by Bellingcat points to recent contacts between the National Corps and alleged former U.S. armed services members who are currently in Ukraine. 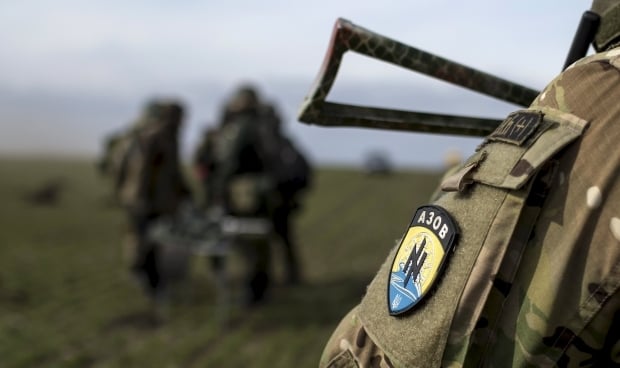 Newly uncovered evidence going back to 2015 suggests that the Ukrainian white nationalist Azov movement has been systematically co-opting American right-wing extremists to advance the former's own international agenda.

The International Secretary of the National Corps, responsible for Azov's global strategy, told Bellingcat that the movement sought "all potential sympathizers" and "potential lobbyists" in the U.S., and hoped to "establish contacts with the American military."

Bellingcat has confirmed that in January 2016, Azov, via its online podcast, was in contact with the late Andrew Oneschuk, an imminent member of the violent American neo-Nazi organization Atomwaffen Division. On Azov's podcast, Oneschuk discussed issues facing Americans that wanted to join Azov, and expressed interest in learning methods of attracting youth to nationalism in America. He was encouraged to try to join Azov.

In another previously unreported case from the autumn of 2018, the political wing of Azov, the National Corps, supported an effort by Joachim Furholm, a Norwegian citizen and self-described "national socialist revolutionary," to bring American right-wingers to Ukraine to fight against Russian aggression. The effort specifically framed participation in Ukraine's war against Russian aggression as an opportunity for American right-wingers to acquire combat and other practical experience to be deployed later within the United States after returning home. Furholm also spoke at a political rally held by the National Corps in front of Ukraine's Parliament in September 2018.

Evidence uncovered by Bellingcat points to recent contacts between the National Corps and alleged former U.S. armed services members who are currently in Ukraine.

In audio statements uncovered by Bellingcat, this agenda was summarized by the International Secretary of the political wing of Azov, the National Corps, as "world conservative revolution," aimed to "defend the white race."