Ukrainian President Petro Poroshenko, who is now in Artemivsk, has visited the deployment of the Ukrainian troops who were able to break through militant encirclement in Debaltseve. 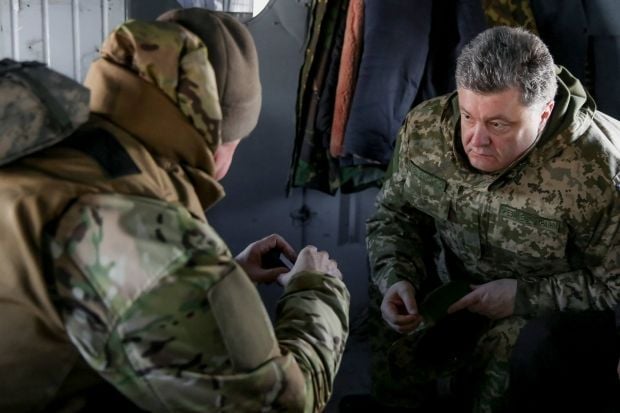 "I've visited the deployment of Ukrainian troops who have arrived from Debaltseve. I’ve presented state awards and informed that Colonel Serhiy Shaptala has been granted the Hero of Ukraine title," Poroshenko wrote on Facebook.

The president thanked Shaptala, who is the commander of the 128th Mukacheve brigade, and all personnel "for exemplary accomplishment of a combat mission, for courage and heroism” they’ve demonstrated over the past six months.

"Not only Mukacheve and Zakarpattia, but also the entire Ukraine is proud of you today," he added.

According to the president, every driver who managed to pull his vehicle from the field of battle will be paid a combat allowance and an increased salary, and all the military units that were able to break through militant encirclement in Debaltseve will be replaced by new rotational forces.

The Defense Ministry’s press service in turn reported that Poroshenko had visited the deployment of the Ukrainian military during his working visit to the town of Artemivsk in Donetsk region and had met with high-ranking officers.