Ukrainian President Petro Poroshenko suggests that the European Union send a mission of its military experts to participate in the work of the Joint Centre for Control and Coordination (JCCC) in the east of Ukraine.

Poroshenko and Tusk also shared their views about the situation in Donbas and touched upon the status of the implementation of the Minsk agreements. The Ukrainian president noted that the destruction of the town of Debaltseve by pro-Russian militants and on-going shelling in the areas of Donetsk Airport, Pervomaisk, Mariupol and Horlivka do not indicate a permanent ceasefire and subsequently the willingness of the parties to abide by the Minsk accords consistently. To facilitate the implementation of the peace agreements, Ukraine’s National Security and Defense Council has decided to appeal to the UN Security Council and the Council of the European Union to send peacekeeping forces to Ukraine, Poroshenko told Tusk.

The two parties also covered possible ways to respond to the situation and the possibility of introducing further restrictive measures by the EU against Russia over Ukraine.

Tusk in turn confirmed the acceptance of the Ukrainian president’s invitation to visit Kyiv on February 22 to attend the March of Dignity, where the parties will be able to continue the dialogue regarding further action, the report said. 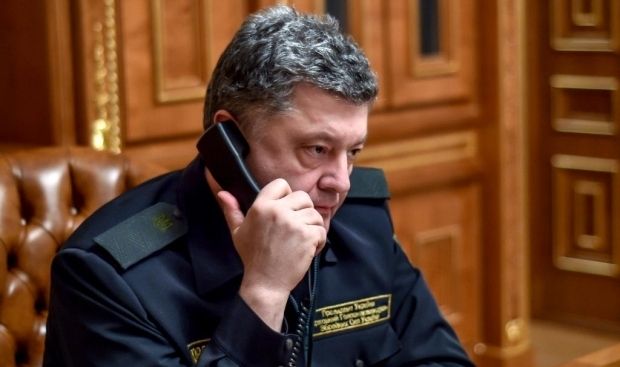 Poroshenko is holding a telephone conversation with Tusk / Poroshenko’s official Twitter page
If you see a spelling error on our site, select it and press Ctrl+Enter
Latest news