The Ukrainian president says that the exploit of the Heavenly Hundreds Heroes has inspired Ukrainians to fight for their freedom. 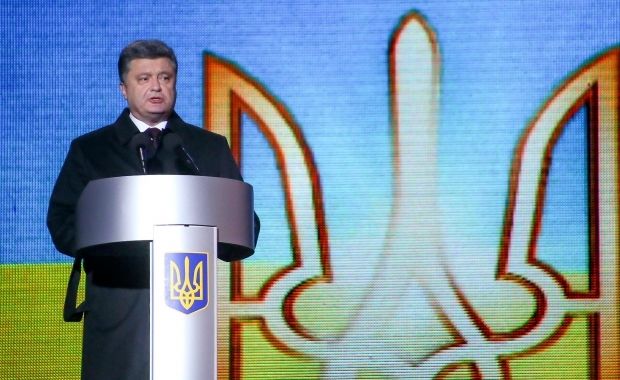 "The Revolution of Dignity has become the first, and what is important, victorious battle for our independence," Poroshenko says /president.gov.ua

Ukrainian President Petro Poroshenko during his speech on the occasion of the Day of the Heavenly Hundreds Heroes said that Ukrainians on the Maidan, Kyiv's Independence Square, was countering not only Viktor Yanukovych's marionette regime, TSN.ua reported.

"Now it is clear that Russian aggression against Ukraine began with the failure of Vilnius [plans]. And on November 21, the non-Ukrainian government decided to stop a rapprochement with Europe," the president said.

"The Revolution of Dignity has become the first and, what is most important, victorious battle in the war for our independence," the president said.

Poroshenko noted that it had been the feat of the Heavenly Hundred, which had inspired Ukrainians to fight for their freedom.

The year 2015 should become decisive for reform in the country, he said.

"Dear friends, dear compatriots, we managed to keep Ukraine from falling apart in 2014. The year 2015 will become crucial for introducing fundamental changes in building a brand new state," the president said, according to an UNIAN correspondent.

Poroshenko also expressed confidence that "Ukraine will live in peace, develop and move towards Europe."