The presidents of Poland and Ukraine discussed the situation in Donbas and the implementation of the Minsk accords. 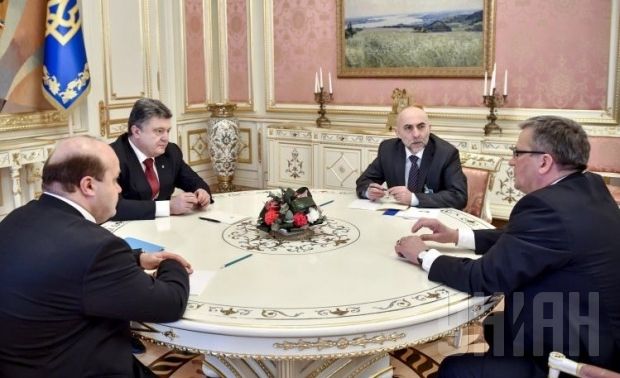 President of Poland Bronislaw Komorowski says he supports his Ukrainian counterpart Petro Poroshenko's initiative to invite peacekeeping forces to the east of Ukraine.

As the Ukrainian president's press service reported, Poroshenko on Sunday met with Komorowski who is now in Ukraine on the occasion of the memorable events devoted to the anniversary of the Revolution of Dignity.

The two presidents discussed the situation in Donbas and the implementation of the Minsk agreements.

"We support the implementation of the Minsk agreements, but we will always remind France and Germany that they have undertaken particular responsibility," Komorowski said, having welcomed Poroshenko's initiative to invite peacekeepers to Donbas.

The parties also agreed to boost cooperation between Ukraine and Poland in the defense and energy sectors.

Similar rallies were held across the country, Poroshenko said. "Our enemies have tried to destabilize the situation in Ukraine," the Ukrainian president said, pointing out to a fatal blast in Kharkiv on Sunday. Another act of terror was prevented by special forces in Odesa, he said.

President Komorowski thanked his Ukrainian counterpart for the invitation to attend the March of Dignity. "I couldn't but come here on the anniversary of the Maidan. It was an occasion to express Poland's solidarity with Ukraine, which is engaged in a dramatic struggle for its independence," Komorowski said.

According to the Polish president, his participation in the March of Dignity had been an occasion to demonstrate support towards European aspirations by Ukrainians.