SBU investigates Surkov’s involvement in destabilization of situation in Ukraine

Ukraine’s SBU state security service has opened an investigation into the involvement of Adviser to the President of the Russian Federation Vladislav Surkov in the destabilization of the military-political situation in Ukraine, SBU Chairman Valentyn Nalyvaichenko said at a briefing in Kyiv on Friday, according to an UNIAN correspondent. 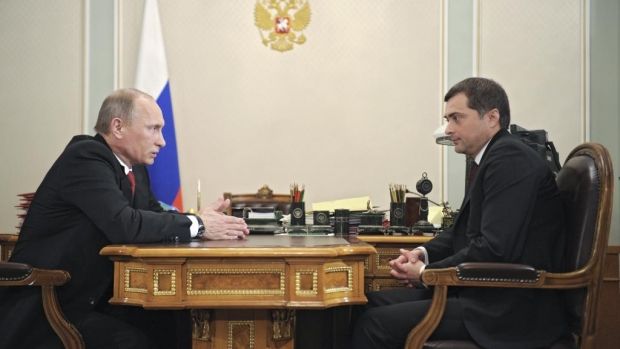 "The SBU, together with the Prosecutor General's Office, has reviewed all available materials concerning the arrival of Surkov in Ukraine last year, and the arrival of three generals of the FSB of the Russian Federation," he said.

According to Nalyvaichenko, these people came to Ukraine in December 2013 and January 2014. In particular, the Russian Foreign Ministry confirmed the last year’s arrival of one of the generals of the FSB named Besedov.

"Today, we can say that in January last year, a group of Russian generals worked in Ukraine’s SBU state security service and met with the top leadership of our country ... All the groups were coordinated by Surkov," Nalyvaichenko said.

"As of today, Surkov has not stopped his military and political intervention in the situation in Ukraine," he said.

In particular, Nalyvaichenko showed to journalists intercepted instructions to the leaders of the self-proclaimed Donetsk and Luhansk People’s Republics that he said came from Surkov.

As UNIAN reported earlier, Ukrainian President Petro Poroshenko, during his speech at the ceremony of presenting state awards to the families of the Heroes of the Heavenly Hundred, as those who were killed by snipers on the Maidan are called in Ukraine, said that the SBU had a lot of evidence from Alpha Group fighters as to Surkov’s involvement in the massacres on the Maidan in February last year, in particular in the organization of foreign sniper teams.