Ukraine, Slovakia sign documents on cross-border cooperation, use of airspace

The documents improve and cement relations between the two countries. 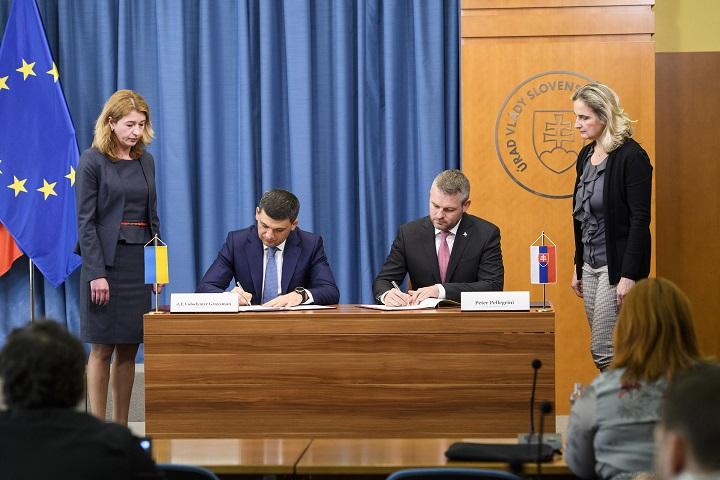 The documents were signed in Bratislava as part of Groysman's working visit to Slovakia / Photo from kmu.gov.ua

Prime Minister of Ukraine Volodymyr Groysman and Prime Minister of the Slovak Republic Peter Pellegrini have signed a number of bilateral agreements, in particular, on the facilitation of cross-border cooperation and the use of airspace.

The documents were signed in Bratislava as part of Groysman's working visit to Slovakia on April 16, the Cabinet's press service said on its website.

In particular, a document amending the May 30, 2008, agreement between Ukraine and Slovakia on local border traffic was signed. The amendments envisage, among other things, local residents' right to stay within the border zone of the neighboring state for up to 90 days.

Apart from that, the parties signed a declaration of intent to conclude an agreement on conditions for the use of a designated part of the Slovak Republic's airspace to service commercial air traffic by the Ukrainian provider UkSATSE at Uzhgorod International Airport.

Commenting on the signed documents, the Ukrainian and Slovak prime ministers noted that the documents improve and strengthen relations between the two countries and their people. "The declaration on the use of airspace is very important to Slovakia and Ukraine. We will shortly sign a full-fledged agreement on this issue," Pellegrini said.

He also underlined that all agreements between Ukraine and Slovakia had been reached quickly. "I want to urge our Ukrainian partners to continue making every effort to implement reforms and to strengthen the investment attractiveness. Slovakia has been helping Ukraine not in words but in deeds and we provide hands-on assistance," he said.

"We have held substantive talks and I praised the opportunity to strengthen our dialogue," Groysman said, in turn.

If you see a spelling error on our site, select it and press Ctrl+Enter
Tags:GroysmanSlovakiaairspacebordercrossingUzhgorod