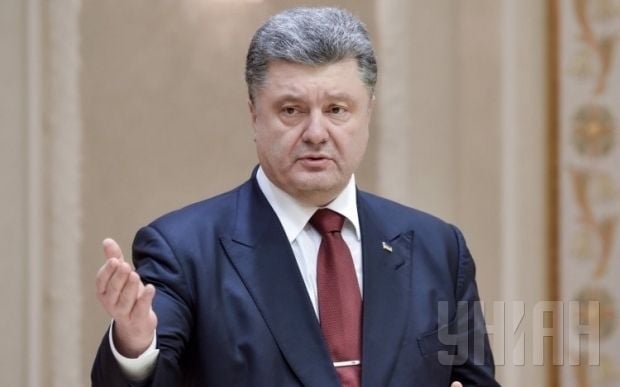 This subject was discussed during Poroshenko's meeting with UK Secretary of State for Foreign and Commonwealth Affairs Philip Hammond in Kyiv on Thursday, the presidential press service reported.

The Ukrainian president noted a clear-cut position and support for Ukraine. "Thank you for the United Kingdom's strong support for Ukraine in safeguarding its independence, territorial integrity and sovereignty. Our struggle is the fight for freedom, democracy, European values and principles," Poroshenko said.

The president also stressed that Ukraine had been paying a high price for its freedom.

What is more, Poroshenko added that the situation was difficult not only in Donbas, but also in the occupied Crimea, where a Crimean Tatar activist was arrested. The parties noted the worsening of the situation in the context of compliance with human rights on the peninsula.

Poroshenko and Hammond emphasized the need for fulfilling the Minsk agreements by all the parties. "It will be very dangerous if the European partners will put on rose-colored spectacles, believing that everything is all right," the president said. He reminded that not all hostages, including Nadia Savchenko, had been freed so far, the border remained uncontrolled and the foreign troops hadn't been withdrawn from the occupied territories.

The president noted that in order to de-escalate the situation it was necessary to deploy a peacekeeping mission in Ukraine. The parties agreed that the OSCE mission to Ukraine should be enhanced.

The parties also discussed economic and defense cooperation. The president noted that Ukraine counted on further support from the United Kingdom and efficient cooperation between the countries. "We are grateful for your participation in the NATO trust fund. We are satisfied with our cooperation in economic sphere," Poroshenko said.

The Ukrainian president urged the United Kingdom to ratify the Association Agreement between Ukraine and the EU.

Hammond in turn said: "I'd like to reiterate our decisive support to your struggle for sovereignty and territorial integrity of the entire Ukrainian territory."

He added that the EU was willing to support the policy of sanctions against Russia and further enhance them in case of escalation.