A rally in solidarity with Ukraine took place in Moscow. 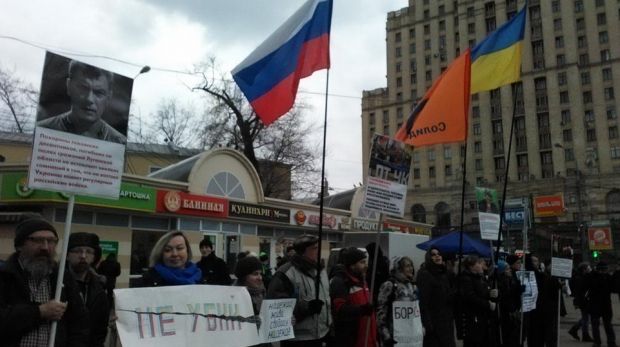 An anti-war rally in Moscow /Photo from @Alasta_ven

Up to 20 people took part in the event. It had been agreed with local authorities in advance.

Participants in the rally were holding posters calling on the Kremlin to stop military aggression against Ukraine, Ukrainian Channel 5 reported.

In addition, there were banners with portraits of killed Russian opposition leader Boris Nemtsov and jailed Ukrainian pilot Nadia Savchenko. Activists were also wearing yellow and blue ribbons patterned in the national colors of the Ukrainian flag.

The rally was resolutely countered by supporters of Putin's policy. A few dozens of people with flags of Russia and black and orange ribbons of Saint George, used by Russian civilians as a patriotic symbol and widely associated in Ukraine with Russian nationalist and separatist sentiment, gathered near the venue of the event. They made attempts to disrupt the anti-war rally. However, Russian police took measures to prevent clashes.