Zelensky sees Donbas truce as his No. 1 task

Zelensky calls on his nation to bridge differences. 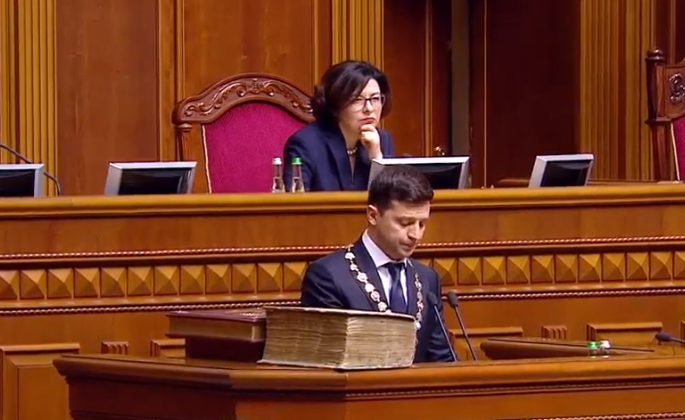 Ukrainian President Volodymyr Zelensky says he sees a ceasefire in Donbas, eastern Ukraine, as his No. 1 task.

"We'll have to play football as Iceland's team, defend our native land as the people of Israel, [we must be] the Japanese in technology, the Swiss in the ability to live happily with each other, despite any differences. And our first task is a ceasefire in Donbas," he said, addressing the nation after the inauguration ceremony in parliament on May 20, according to an UNIAN correspondent.

"I can assure: I am willing to do everything for our heroes not to die anymore. And I am definitely not afraid of making difficult decisions. I am ready to lose my post without hesitation for peace to be established. But without losing our territory," the presidential press service quoted Zelensky as saying.

He also noted that he was ready for the dialogue to end the war.

"And I am sure that the first step towards starting this dialogue will be the return of all our captives," he said in Russian.

Zelensky is convinced that the next step should be the return of the lost territories. "For this purpose, first of all, we should appeal to the consciousness of the residents of the occupied part of Donbas and annexed Crimea," he said.

As UNIAN reported earlier, Zelensky sworn the oath of allegiance to the people of Ukraine and officially became president on May 20.

If you see a spelling error on our site, select it and press Ctrl+Enter
Tags:DonbasUkrainepresidenttruceZelensky