Yarosh 'to become advisor to Chief of Staff'

MP and Right Sector party leader Dmytro Yarosh is to be appointed advisor to the Chief of Staff, volunteer Tetiana Rychkova wrote on her Facebook page on Sunday. 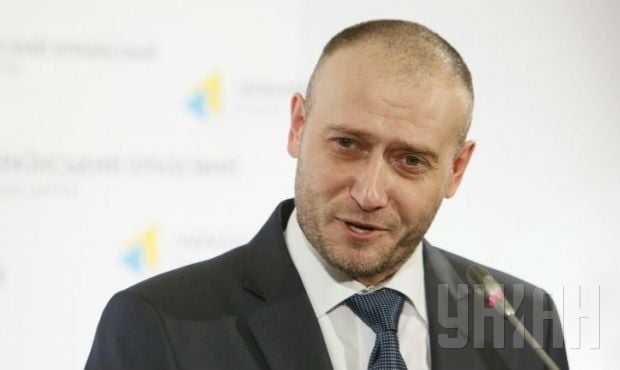 "... Indeed, the rumors are not groundless - Dmytro Yarosh will be appointed advisor to Chief of Staff,” Rychkova wrote.

“First of all, this is necessary for the volunteer movement to coordinate better with the Ukrainian armed forces in the Donbas conflict zone. It is Dmytro who will be able to work constructively in this direction."

Yarosh led the Right Sector organization during the Maidan protests last year. The organization was controversial for using force to resist police attempts to break-up the long-running protests, and for its links to far-right groups in Ukraine.

Yarosh later went on the form a political party based on Right Sector. He ran for president in the May 2014 presidential election, receiving 0.7% of the vote.

He gained a seat in the Verkhovna Rada, Ukraine’s parliament, in the October 2014 parliamentary elections, winning 29.76% of the vote in a first-past-the-post election in electoral district No. 39. He is not a member of the pro-presidential coalition in parliament.

Yarosh was recently slightly wounded in the village of Pisky by shrapnel from a Grad rocket fired during fighting for control of Donetsk Airport.

He was put on Interpol’s international wanted list on July 25 at the request of the Russian authorities. He has been charged by the Russian courts of “publicly inciting terrorism.”