The way to stop Putin is to be found in a phrase used by former U.S. President Ronald Reagan - “peace through strength,” U.S. Republican Senator John McCain said in an interview with Ukrainian news broadcaster TSN.Tyzhden on Sunday. 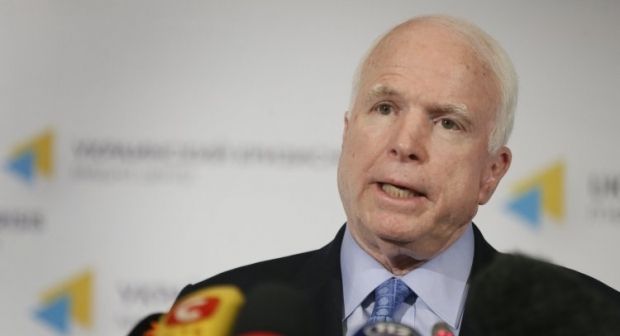 "We show our strength, we can help Ukraine to protect itself, and we send NATO forces in the countries, which are located nearby - Poland, Romania, the Baltics, and others,” McCain said.

“And here we give a very clear message to Vladimir Putin - the price he will pay for the aggression is above the goals that he set," he said.

"Putin must understand who he is. He is an old KGB apparatus worker who, in his own words, wants to restore the Russian empire. And, first of all, he sees in Ukraine a key element, because Russia came from Kyiv," McCain said.

"While Ukraine carries out reforms, the current situation could end very quickly," he added.

"I am sure that while Ukraine is implementing reforms, as long as people want and support them, everything may end very quickly. As for Putin, the situation is directly related to how he feels [about] the price he pays for further aggression, and that this price is really high. Because the coffins are already returning to Russia and mothers begin to say: ‘Enough!’ McCain said.