Coalition parties split over question of special status for Donbas

Ukraine’s governing coalition does not have an agreed position over the special status of the territories in the combat zone in the east, First Deputy Head of the pro-presidential Bloc of Petro Poroshenko faction Igor Kononenko said on Tuesday. 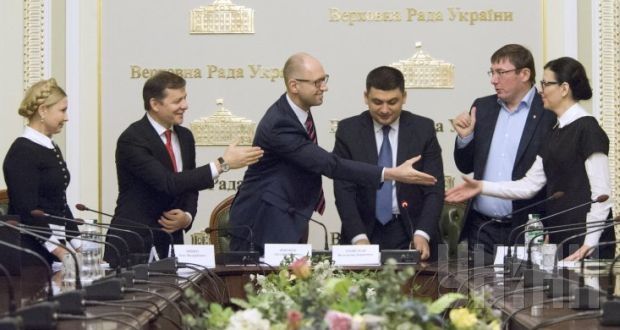 "There is no coordination of positions in the coalition regarding the special status of the area of the ATO implementation,” Kononenko said.

“At the moment, the factions of the Radical Party, Samopomich and Batkivshchyna are not ready to support the bill submitted by the president. The coalition council is to be adjourned later. We will try to find common ground.”

Kononenko also said discussions are being held about the relevant resolution and a bill related to this issue.

Leader of Radical Party Oleh Liashko said Secretary of the National Security and Defense Council Oleksandr Turchynov was also involved in the consultations with the leaders of the factions.

"There are attempts being made to convince us and to find a compromise on the issue of voting for these laws," Liashko said, adding that his party will not support these legislative initiatives, which he said he interprets as the "legalization of Russian occupation."