Sajdik noted the constructive discussions of the meetings both in the TCG and its Working Groups. 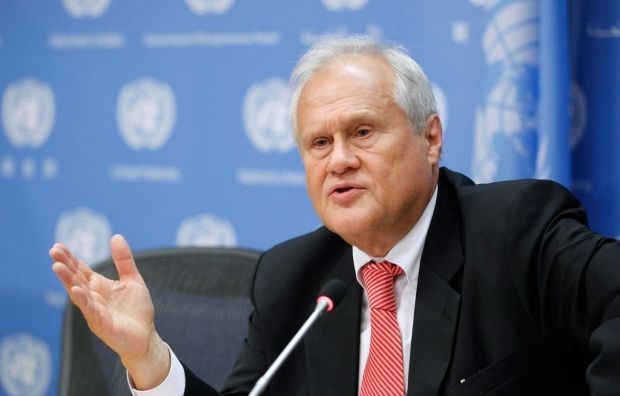 Special Representative of the OSCE Chairperson-in-Office in Ukraine and in the Trilateral Contact Group (TCG) Ambassador Martin Sajdik has said the interval in the TCG work, caused by the political changes in Ukraine, was "needed and useful."

"Six weeks have passed since the previous TCG meeting. This interval in our work, caused by the well-known political changes in Ukraine, was nevertheless needed and useful. I would like to note the constructive discussions of today's meetings both in the TCG and its Working Groups. This is encouraging," he said in a press statement after the meeting of Trilateral Contact Group on June 5, 2019.

Sajdik said he was very pleased that Leonid Kuchma, the second President of Ukraine, had returned to the TCG.

"I also welcome the appointment of Ms. Valeriya Lutkovska as the representative of Ukraine in the Humanitarian Working Group. As Ombudsperson, she has previously participated in the Working Group meetings and is well acquainted with its work," he said.

"Moreover, there was a change in our team. Ambassador Yasar Halit Cevik succeeded Ambassador Ertugrul Apakan in the position of Security Working Group Co-ordinator. I personally know Ambassador Cevik from our work at the UN in New York and I am very pleased to co-operate with him here, too," the OSCE special representative said.

According to him, the Security Working Group discussed the prospects of a recommitment to the ceasefire.

"The sides also expressed their intention to launch the disengagement of forces and hardware in the agreed area at Stanytsia Luhanska on June 10, 2019. That would be real progress," Sajdik said.

The Humanitarian Working Group continued discussions related to the exchange of detainees. In addition, with the participation of ICRC representatives, a detailed exchange on the search for missing persons took place.

Read alsoOne KIA, one WIA amid 12 enemy attacks in Donbas in past day

Sajdik said the Economic Working Group had focused on the consideration of current water supply issues in Donetsk and Luhansk regions on both sides of the contact line.

"The Political Working Group took forward its exchanges on its well-known agenda, namely the implementation of the 'Steinmeier formula,' amnesty and the modalities of local elections in certain areas of Donetsk and Luhansk regions," he added.

If you see a spelling error on our site, select it and press Ctrl+Enter
Tags:RussiaDonbasOSCESajdikTCGKuchma