Poroshenko and Kolomoisky: neither conflict, nor misunderstanding

Ukrainian President Petro Poroshenko and former Dnipropetrovsk Regional Governor met in Dnipropetrovsk on Thursday to hold a joint press conference. They announced that there was no conflict between them. 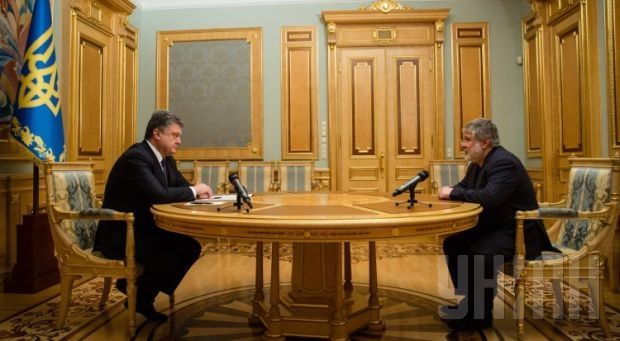 "Poroshenko [said]: 'I, as President, I cannot allow private firms to use weapons. Kolomoisky will be engaged in social and economic activity,'" Tseholko wrote, quoting the president as saying.

Poroshenko thanked Kolomoisky for the work done, noting his contribution to the country's development at the hard times for the nation.

According to Poroshenko, Kolomoisky's team would often play it close to the edge, however, they manage to withstand all hardships and keep the country from a break-up.

"This is due to the whole team, all the residents of Dnipropetrovsk," Poroshenko said.

"There is neither a conflict nor misunderstanding," Kolomoisky said in turn when commenting the relationship with the president. "We've got normal relations with Mr. Poroshenko. He is a very patient man. I would dismiss myself after a three-month term," Kolomoisky added.

Kolomoisky also assured of support for the newly appointed governor of the region, saying that his team will continue working for the good of the country.

"We live here, we don't go away. We are with you," Kolomoisky said.

"President [said]: 'There is nothing personal in the nature of my decisions. [Ihor] Kolomoisky and his team are real patriots,'" Tseholko continued quoting Poroshenko as saying.