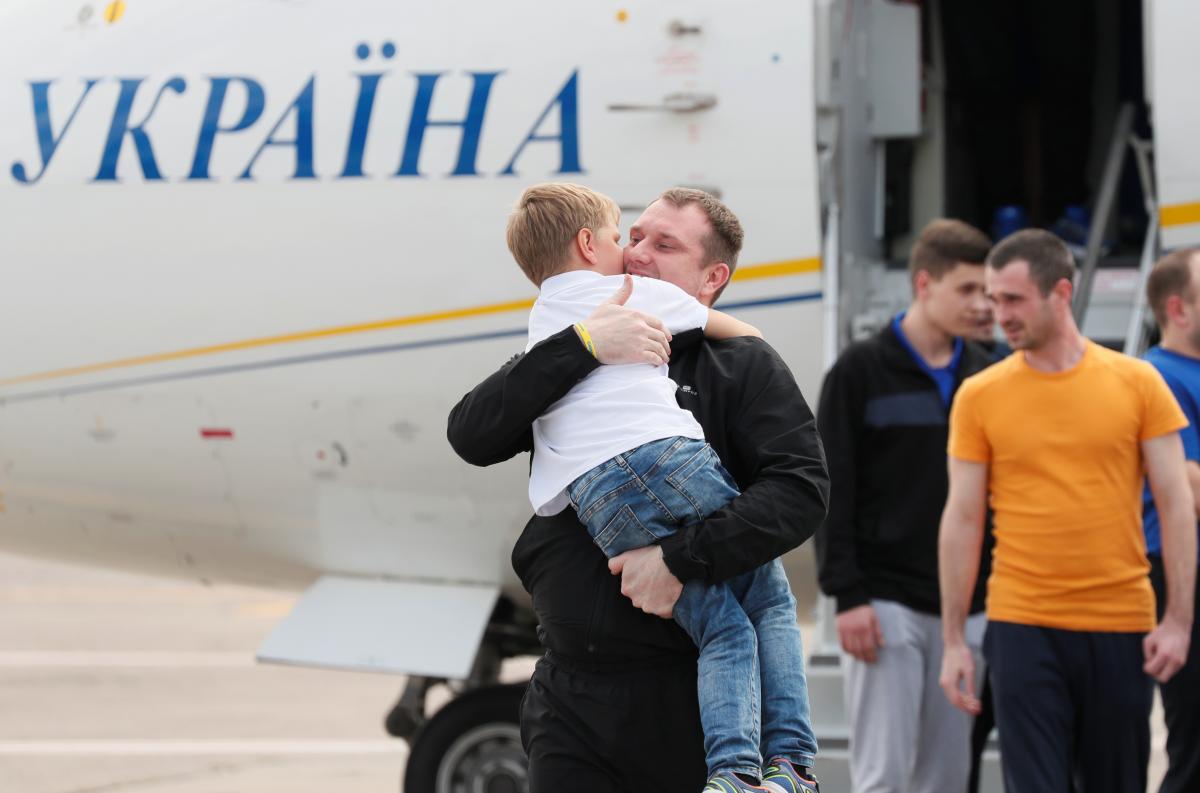 The press service of Ukrainian President Volodymyr Zelensky has posted a full list of Ukrainians who returned home on September 7, 2019 as part of a prisoner swap between Ukraine and the Russian Federation.

In addition, 24 Ukrainians sailors captured by the Russian Federation in the Kerch Strait on November 25, 2018 were freed today:

- Bohdan Holovash, graduate of the Institute of Naval Forces;

- Vasyl Soroka, captain, was on board of the Berdyansk armored naval boat;

- Vladyslav Kostyshyn, graduate of the Institute of Naval Forces;

- Adnriy Drach, captain, was on board of the Nikopol armored naval boat;

- Volodymyr Lisoviy, commander of the 31st division of the logistics vessels;

- Volodymyr Varimez, senior radiotelegraph operator of the Smila training boat of the 31st division of the logistics vessels;

- Serhiy Chuliba, commander of the division of motorists of the Nova Kakhovka training boat of the 31st division of the logistics vessels;

- Yuriy Budzylo, commander of the radio control platoon of the 21st separate company of the naval command. 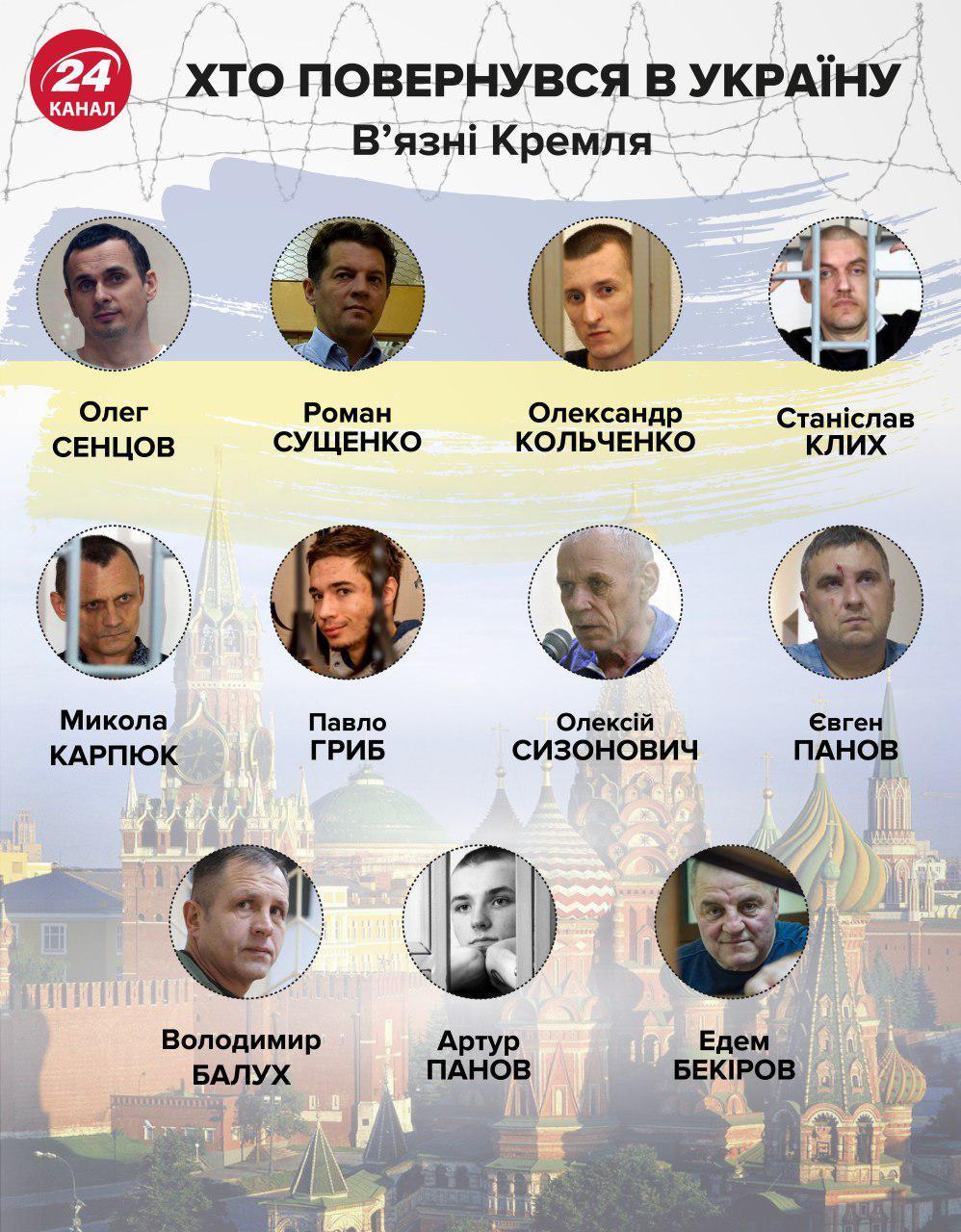 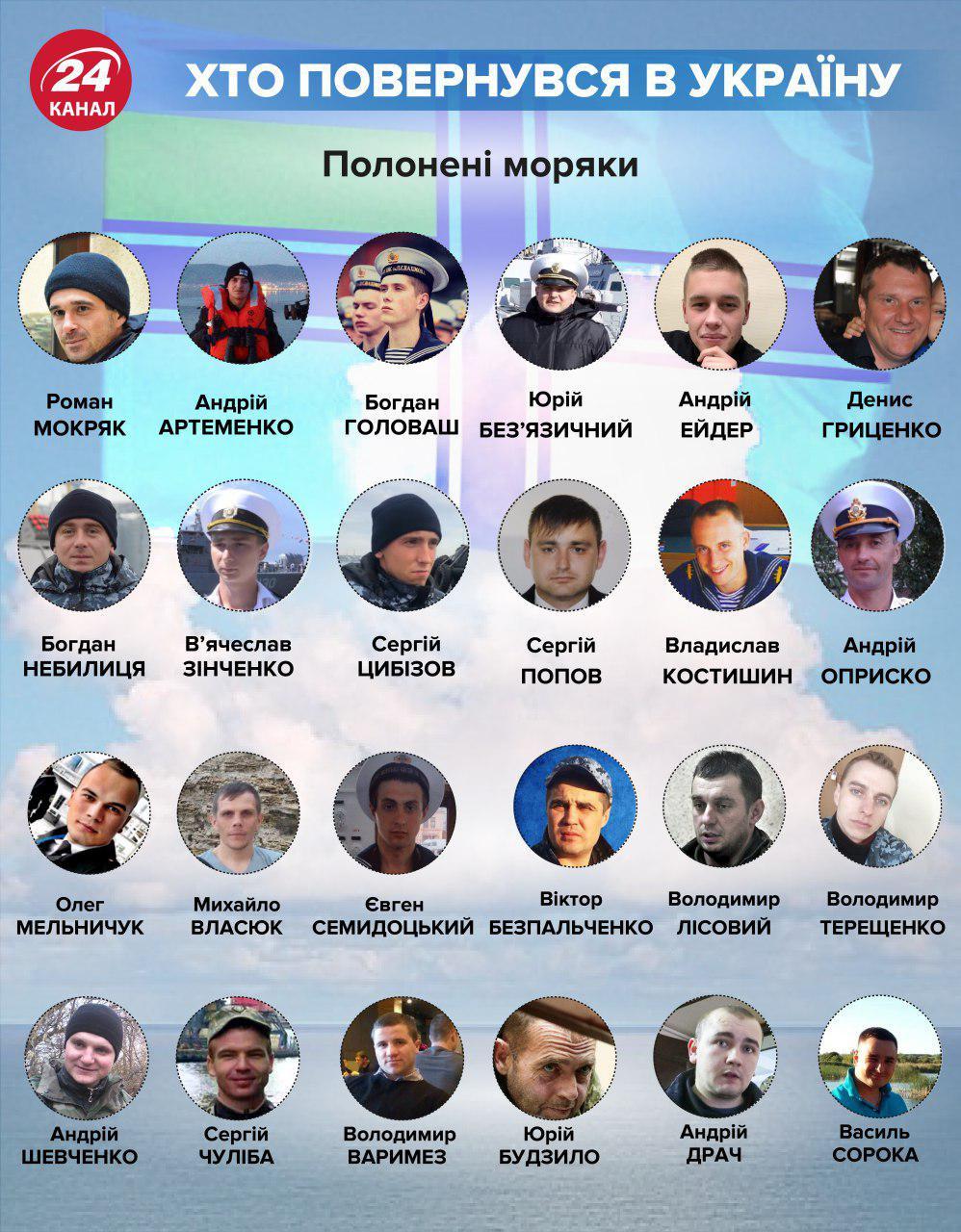 The Supreme Court of Chechnya in May 2016 sentenced Ukrainian citizens Stanislav Klykh and Mykola Karpiuk to 20 and 22.5 years in prison, respectively, for alleged gang-related activities, murder and attempted murder of Russian military servicemen. The Russian investigation alleged that Klykh and Karpiuk set up groups in Ukraine to participate in fighting against the Russian army for independent Chechnya during the first Chechen war.

Pavlo Hryb was just 19 when he was abducted by the FSB from Belarus on August 24, 2017, after going there to meet who he thought was a young woman he had chatted with online and fell in love with. He was tried in Russia on trumped-up "terrorist" charges as investigators claim he instructed an accomplice to set off an explosive device at a Russian schoolyard. Russia's North-Caucasian District Military Court on March 22 sentenced Hryb to six years in a penal colony for allegedly "promoting terrorism."

Volodymyr Balukh was detained by Russia's FSB Federal Security Service on December 8, 2016. FSB operatives claimed that they had allegedly found 90 ammunition rounds and several TNT explosives in his attic. On July 5, 2018, a Russian-controlled in Crimea sentenced him to five years in a penal colony and a RUB 10,000 fine. On October 3, 2018, the so-called "Supreme Court of Crimea" reviewed Balukh's original verdict and reduced his term to four years and 11 months.

The FSB detained Roman Sushchenko at a Moscow airport upon his arrival on September 30, 2016. He was charged with "espionage," as the Russian authorities insisted he was an "operative" of Ukraine's intelligence service. Moscow's city court on June 4, 2018, sentenced him to a 12-year term in a high-security colony.

In August 2017, Artur Panov was sentenced in Russia to eight years in prison for allegedly planning a terrorist attack in Rostov-on-Don.

Russian authorities arrested Yevhen Panov in August 2016, charging him with being part of a "saboteur group" plotting a series of terrorist attacks on the peninsula infrastructure. On July 13, 2018, the "supreme court" of Russian-annexed Crimea sentenced him to eight years in a high-security penal colony.

Oleksiy Syzonovych in July 2017 was sentenced in Russia to 12 years in prison. He was charged with plotting terrorist attacks in Rostov region, illegal border crossing and illegal possession of explosives.

On December 12, 2018, Russian security forces detained Bekirov at the de-facto border between mainland Ukraine and Russia-occupied Crimea. He was accused of storing, distributing and transporting more than 10 kg of TNT and 190 rounds of live ammo.

On the morning of November 25, 2018, Russia blocked the passage to the Kerch Strait for the Ukrainian tugboat "Yany Kapu" and two armored naval boats "Berdyansk" and "Nikopol," which were on a scheduled re-deployment from the Black Sea port of Odesa to the Azov Sea port of Mariupol. All 24 crew members on board were charged with "illegal border crossing."

If you see a spelling error on our site, select it and press Ctrl+Enter
Tags: #Russia#Ukraine#list#Ukrainians#prisonerswap#POWs#sailors
Latest news