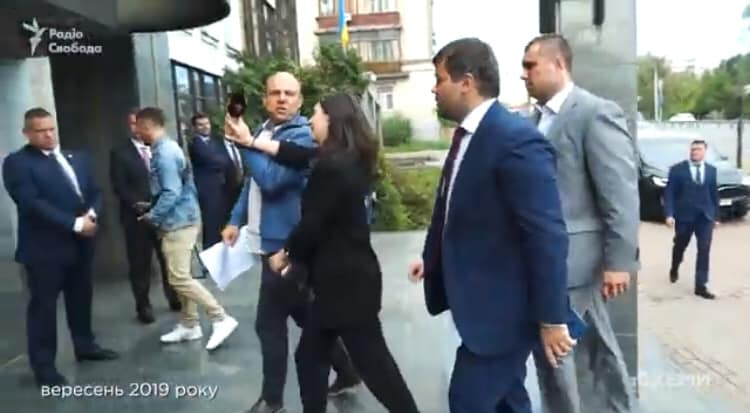 Ukraine's main union of journalists has called on the presidential office and its spokeswoman to issue a formal apology to journalists from Radio Free Europe/ Radio Liberty (RFE/RL) and to alter their treatment of journalists.

The National Union of Journalists of Ukraine (NUJU) on September 28 specifically mentioned presidential spokeswoman Yulia Mendel who has been shown this month shoving or pulling aside journalists who approach President Volodymyr Zelensky, RFE/RL said.

"The press secretary of the president has no right to physically interfere in the work of journalists," NUJU head Serhiy Tomilenko said on social media. "Journalists shouldn't have to put up with behavior associated with either friendly hugs or shoving and pulling."

In one episode, journalist Serhiy Andrushko from RFE/RL's Ukrainian Service stood waiting for the president and his office head, Andriy Bohdan, near the main entrance to the presidential office building.

When Zelensky approached, Mendel was seen intercepting Andrushko as he started to ask a question, shoving him aside.

In response, Mendel denied pushing the journalist, saying she was concerned about the president's safety and was trying to protect Zelensky's "personal space."

On September 13, Mendel shoved aside RFE/RL's Kyiv correspondent Christopher Miller when he started talking to Zelensky at a prestigious yearly conference in Kyiv devoted to Ukraine’s European aspirations and prospects.

If you see a spelling error on our site, select it and press Ctrl+Enter
Tags:journalistincidentZelenskyMendel