Ukrainian billionaire Rinat Akhmetov is defending the interests of his companies by blackmailing the government through staging protests by miners, MP from the Bloc of Poroshenko party Mustafa Nayyem wrote in his blog in Ukrainian online newspaper Ukrainska Pravda on Friday. 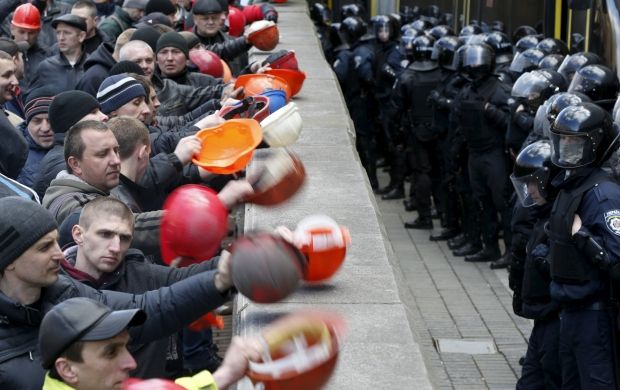 Nayyem posted a document as evidence for his claims. Entitled “Krepost” (or “Fortress” in English), it is alleged to detail plans by one of the companies Akhmetov owns to retain its monopoly on the energy market by organizing public protests and influencing the country’s media, politicians, unions, and judges.

"I have reason to believe that the events of recent days in Kyiv, including the miners' strike, the [holding of the] Congress of the miners' union, the demands for the resignation of the energy minister and the attack on the government and the president allegedly from the industry is a part of a plan to protect the interests of Akhmetov’s companies on the energy market,” Nayyem wrote.

“And to be precise, these are attempts by a businessman to suspend any actions to reform the electricity market and to maintain the status quo of a monopolist.”

According to Nayyem, the directors of DTEK, under the leadership of Maxim Timchenko, drew up a detailed description of all the activities that are planned to be realized by the management of Akhmetov’s companies in the coming months.

"The internal name of the document is ‘Fortress’... The document consists of four modules, which describe a strategy to protect the interests of DTEK and tactical steps in the period from January to May of this year. Deadlines of some of the activities listed in the document are scheduled for July and August. Meanwhile, most of the events should already have been carried out," Nayyem said.

According to Nayyem, the fact that the company DTEK is an absolute monopoly on coal market needed to generate electricity is known to experts and officials over the years.

Coal makes up 70% of the cost of electricity produced by thermal power plants. DTEK supplies approximately 67% of the volume of the required type of coal.

"Taking advantage of its monopoly position, Rinat Akhmetov may dictate almost any price [his company’s] products, which affects the final price of electricity. [But] Akhmetov has large foreign currency loans. The dollar exchange rate is growing. It is growing not only for DTEK, but for the miners who extract coal in the mines of DTEK," Nayyem said.

"Seeing the approach of default, the managers of Akhmetov include losses on loans into the cost of coal and imposed on the state a new price, without a moment's thought about the salaries of the miners. And when the state refuses to accept the new price, DTEK brings thousands of miners onto the streets protesting against the bankruptcy industry and demanding the resignation of the energy minister," he said.

According to Nayyem, at the moment Akhmetov has two goals.

"The first goal is short-term - to buy time to restructure the debts of DTEK, including at state expense. The second one is more important - to maintain a monopoly position in the energy market and to prevent the revision of the tariff for energy," he said.

The MP also said that he had already sent to the Prosecutor General’s Office, the Security Service of Ukraine and the Interior Ministry appropriate requests to verify the involvement of management of DTEK in the organization and financing of protests, interference in the activities of public authorities, and attempts to exert an improper influence on officials in order to protect commercial interests.