According to the court ruling, the DBR can search Skhemy's premises if the group doesn't voluntarily provide investigators with requested information. 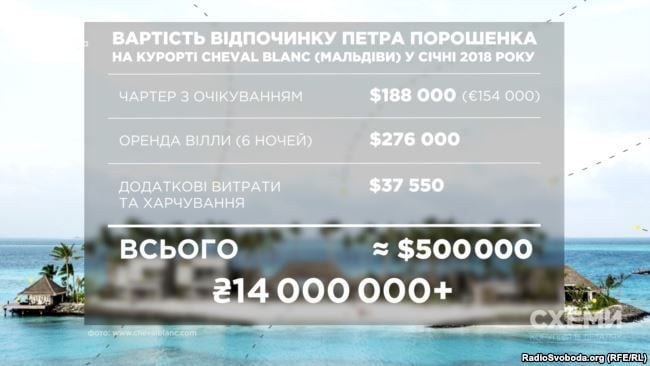 Poroshenko's trip to the Maldives in Jan 2018 was the subject of a Skhemy probe / Image from radiosvoboda.org

A Ukrainian investigative journalism outlet has publicly objected to a court ruling that gave the State Bureau of Investigations (SBI), also known as the DBR, wide-ranging access to the group's internal communications and documents that it says is "excessive" and runs the risk of revealing editorial sources.

Skhemy (Schemes), a joint project of RFE/RL's Ukrainian Service and UA:Pershy television, issued a note of protest on October 23 saying the DBR had been granted inordinate powers that "unjustifiably interfere in the editorial department's work," RFE/RL said.

Based on the October 17 Kyiv's Pechersky district court ruling, the DBR has permission to learn the work schedules and itineraries of the editorial staff, its camera operators and drivers, their salaries, and internal communications, including the process of making corrections and edits as well as how decisions are made on what to show on their investigative programs.

The ruling relates to a DBR criminal investigation of whether former President Petro Poroshenko used "deliberately forged documents" and illegally crossed international borders when he and an unspecified number of people vacationed in the Maldives on January 1-8, 2018, which was the subject of a Skhemy investigation.

The journalism group aired its investigation on January 18, 2018 and in the program it hypothesized that Poroshenko may have used forged documents when travelling.

At a February 28, 2018 news conference, Poroshenko said he crossed the border using his name, "with my own passport that was properly registered with the border guards."

After Skhemy's protest note was published, the DBR said all the information that it "requires from Radio Liberty will relate exclusively to the program Skhemy: Corruption In Details."

The information, the DBR said, will help with the criminal investigation "inasmuch as Poroshenko isn't providing evidence to establish all the circumstances within the framework of the investigation," which is why Skhemy's assistance is needed.

However, the journalist group countered that the DBR hadn't explained how access to staff schedules, salaries, and decision-making processes could help with the criminal investigation.

Separately, Skhemy chief editor Natalka Sedletska noted that the group had already cooperated with investigators by providing them with official inquiries that journalists submitted during their investigation to various government bodies and individuals.

The group further added that it will not provide the authorities with internal correspondence and any information related to program production processes.

According to the court ruling, the DBR can with a separate court order search the premises of Skhemy if the group doesn't voluntarily provide investigators with requested information.

The DBR's investigation into the former president was announced on August 6.

If you see a spelling error on our site, select it and press Ctrl+Enter
Tags:PoroshenkoprobeinvestigationjournalismSBI