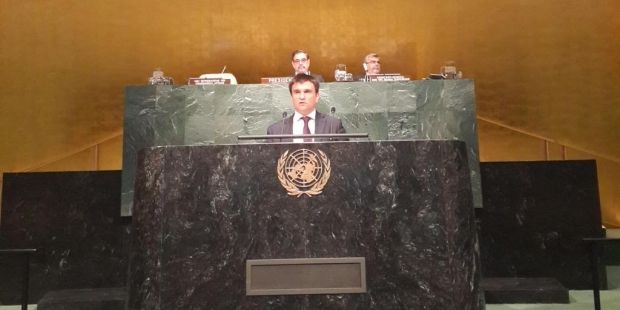 "As for the visit of Ban Ki-moon, I think it would send entirely the wrong signal," Klimkin said at a press conference at UN headquarters in New York. He went on to accuse Russia of violating the "key principles" of the UN Charter, Ukrainian news broadcaster TSN has reported.

According to Klimkin, to mark the events of the Second World War, the General Secretary plans a "number of visits to Poland, Ukraine and Moscow."

"But I very much hope that the Secretary General will not attend the parade in Moscow on May 9," Klimkin said.

On 23 April the Russian Foreign Ministry confirmed that Moscow expected that UN Secretary-General Ban Ki-moon would attend celebrations of the 70th anniversary of victory in what is known in Russia as the Great Patriotic War – the period of the Second World War from 1941 to 1945, which started after German dictator Adolf Hitler broke a non-aggression pact between Nazi Germany and the Soviet Union and attacked his former ally.

In early April, the head of the presidential administration of Russia said the leaders of 25 countries and those of several international organizations had confirmed that they would attend the Victory Parade on Red Square.

Prominent among those expected to attend are the leaders of autocratic regimes from Central Asia, as well as the Chinese president. However, the Kremlin announced at lunchtime on Thursday that North Korean dictator Kim Jong-un, who had been expected to come to Moscow, would not attend the parade.

Most leaders of Western countries are staying away from the event in the wake of Russia's agression against Ukraine. While skipping the parade, German Chancellor Angela Merkel does plan to visit Moscow on May 10 for talks in the Kremlin, and to lay a wreath at the tomb of the Unknown Soldier in Moscow.

Pro-Kremlin Czech President Milos Zeman, who earlier said he intended to attend the parade, was forced to back out after running into a barrage of diplomatic outrage from other Western countries. He now says he will visit Moscow, but not attend the military parade.