The fighting in the east of Ukraine has claimed the lives of 1,675 Ukrainian soldiers, Ukrainian President Petro Poroshenko said on Friday at a meeting in the Verkhovna Rada, Ukraine’s parliament. 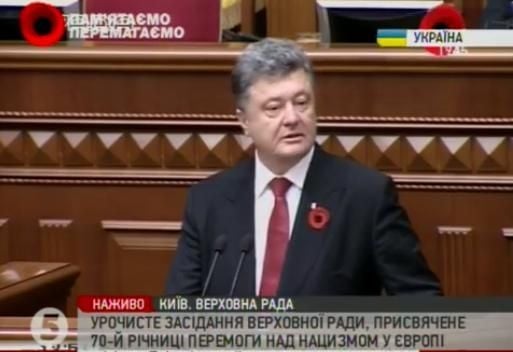 Poroshenko: 1,675 Ukrainian soldiers have given their lives for their country / @poroshenko

The president was addressing a special meeting of parliament dedicated to the 70th anniversary of the victory of the Allies in Europe over Nazi Germany on May 8, 1945.

"In total, in 1,675 Ukrainian soldiers have given their lives for their country, for our victory - an inevitable one, because good always triumphs over evil," Poroshenko said.

Poroshenko also said that the 21 soldiers had been awarded the title of Hero of Ukraine.

Fighting in the Donbas erupted in April last year, when groups of unidentified soldiers started to take over government and security buildings in Donetsk and Luhansk regions.

The group of about 50 men were from a Russian special operations team that crossed into Ukraine from Crimea in early April 2014, their leader, Russian citizen Igor Girkin (also known as Strelkov), has told the Russian press.

Girkin went on to become the “defense minister” of the Donbas People’s Republic militant organization.

Ukraine launched an “anti-terrorist operation” against the armed militants who had seized control of large parts of Donetsk and Luhansk regions, and was on the point of crushing the militant forces in late August last year, when its forces suddenly suffered a series of defeats on the battlefield.

Ukraine says Russian regular troops entered Ukraine in late August to support the failing anti-government insurgency. Russia denies this, but there is a large and growing body of evidence that Moscow has been and continues to be directly involved in the conflict in eastern Ukraine, and may have had a hand in starting it in the first place.