The former secretary of the NSDC of Ukraine said the offer was simply a joke as he had no authority to bring up such topic in the first place. 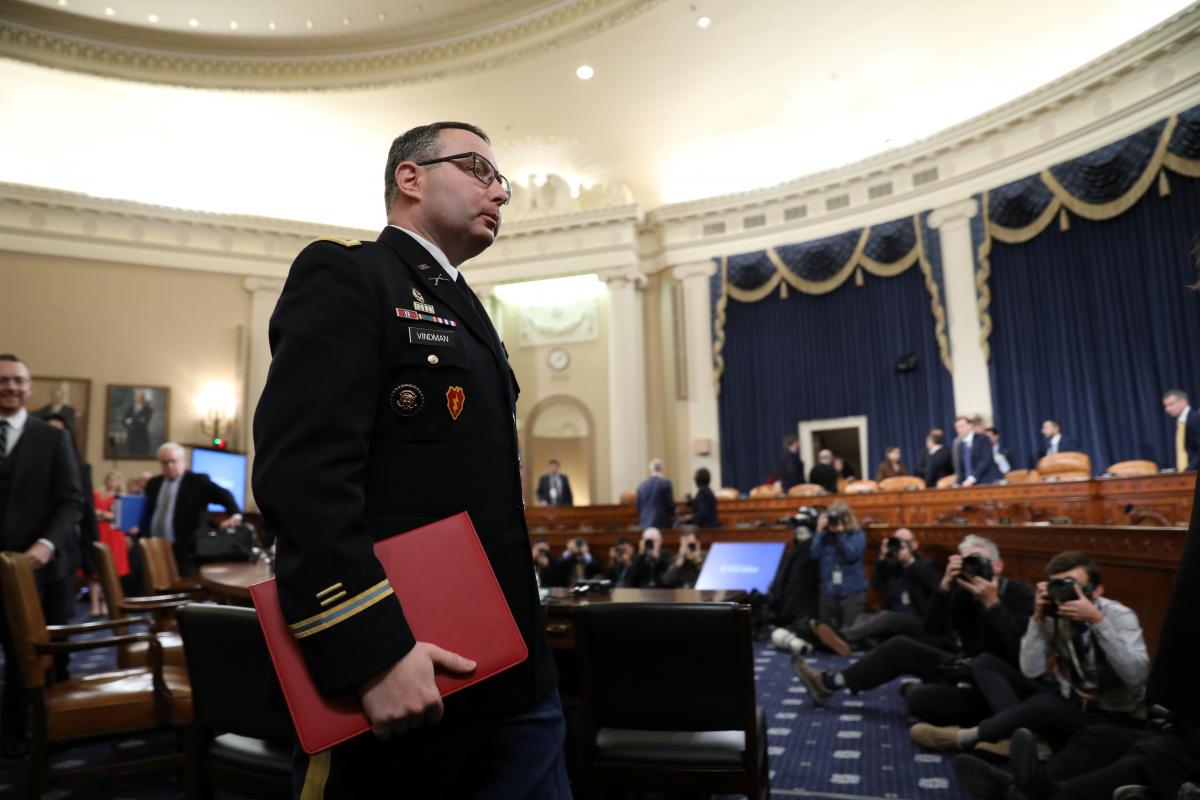 Vindman said he dismissed the offers and notified his chain of command, according to The Daily Beast.

"The whole notion is rather comical," Vindman said.

The line of questioning seemed designed to raise doubts about Vindman's allegiance to the U.S. right as he was testifying about his concerns over President Donald Trump's efforts to dig up dirt in Ukraine on his domestic political rivals.

Vindman said that Danyliuk had suggested he take the job three times but that he "immediately dismissed" the offers and reported the encounters to his superiors at the National Security Council. Vindman also noted that Danylyuk might have been joking when they spoke about the position.

"Ukraine's a country that's experienced a war with Russia," said GOP counsel Steve Castor. "Certainly, their Minister of Defense is a pretty key position. For the Ukrainians – President Zelensky, Mr. Danyliuk – to bestow that honor on you, at least asking you, that was a big honor, correct?"

Vindman said that Danyliuk had suggested he take the job three times but that he “immediately dismissed” the offers and reported the encounters to his superiors at the National Security Council. Vindman also noted that Danylyuk might have been joking when they spoke about the position.

But a former top national security official in Ukraine told The Daily Beast that he was "joking" when he offered Vindman the post and never actually had the authority to make such an offer.

Oleksander Danyliuk, the former Chairman of the National Security and Defense Council in Ukraine, said he only remembers speaking with Vindman once about the defense minister position. He said it he and Vindman had engaged in a light-hearted conversation about how the two used to live close to one another in the former Soviet Union. It was then that Danyliuk jokingly told Vindman that he should take the defense minister job in Ukraine.

"We both smiled and laughed," Danyliuk said. "It was clearly a joke." Danyliuk said he wouldn't have been able to seriously offer Vindman the position without direct sign off from President Volodymyr Zelensky.

Vindman was born in the Soviet Union and at the age of three brought to the U.S. by his father. He is a decorated career Army officer. Beginning in 2008, Vindman became a Foreign Area Officer specializing in Eurasia. In this capacity he served in the U.S. embassies in Kyiv and Moscow. Returning to Washington, D.C. he was then a politico-military affairs officer focused on Russia for the Chairman of the Joint Chiefs of Staff. Vindman served on the Joint Staff at the Pentagon from September 2015 to July 2018 before accepting an assignment with the National Security Council.

If you see a spelling error on our site, select it and press Ctrl+Enter
Tags:USATrumpDanyliukimpeachmentdefenseministerVindmanquid pro quo