On the 70th anniversary of victory over Nazism, Ukraine joined the European tradition of commemorating the 8 May Remembrance and Reconciliation Day, departing from the Soviet narrative of the Second World War, Ukrainian President Petro Poroshenko wrote in a column for the EUObserver on Wednesday, which is reproduced below.

This year, we want to begin to tell the world the true story of the people of Ukraine who found themselves caught between Stalin and Hitler.

Back in 1945, Ukraine got special recognition for its war efforts - as one of the founding members of the UN - in respect of the millions of Ukrainians who gave their lives fighting the Nazis.

As a nation with one of the highest death tolls in the Second World War, we will honour the victims of Nazism and the heroes who died so that we could enjoy the blessings of freedom today.

This year, we rejected a Soviet-style parading of military might.

Victory in Europe Day is meant to remind the living the sorrows war causes, not to consolidate society against some imagined external enemy.

Ukraine was at the centre of the Eastern Front. My homeland was entirely occupied by the Nazis. The war affected each and every family in Ukraine.

It is impossible to find a single person in my country whose family didn’t suffer in 1939-1945. During those horrific years, eight million to 10 million Ukrainians died. To put this statistic in context, out of the 41.7 million people who lived in Ukraine before the Second World War a quarter of the population was lost.

Ethnic Ukrainians weren’t the only victims of Hitler and Stalin – Ukrainian Jews and Crimean Tatars suffered greatly under totalitarian oppression, and we also share their sorrow.

One of the darkest moments in Ukrainian history is 29-30 September 1941. On these days Wehrmacht soldiers shot 33,771 Ukrainian Jews in cold blood in Babyn Yar in Kyiv. Altogether, around 1.5 million Ukrainian Jews became victims of the Holocaust.

Thousands of Ukrainians rescued their Jewish compatriots despite the very real possibility of being caught and sentenced to death by the Nazi occupiers.

One such example is Andrey Sheptytsky of the Ukrainian Greek Catholic Church who saved approximately 250 Jewish children from death by hiding them in a network of Ukrainian monasteries. One of these children was future Polish foreign minister, Adam Daniel Rotfeld. As of May 2015 Israel’s Yad Vashem has recognized 2,515 Ukrainians as “Righteous Among the Nations”.

Another terrible time in Ukraine’s history, and yet another shameful date in the history of the USSR, is May 18-20,  1944 when Soviet authorities carried out the deportation of Crimean Tatars, having accused them of "collective betrayal of the Soviet motherland."

Ukrainians fought against Nazism shoulder to shoulder with many Allied Forces in different corners of the world. Around 6 million served in the Soviet Red Army, 250,000 fought in the uniforms of Poland, Britain, France, Canada, America and many other Allied nations. Additionally, around half a million Ukrainians joined liberation movements.

The anniversary of victory over the Third Reich has always been a day of great pride and grief for Ukrainians. But on this occasion I am experiencing a vicious and alarming déjà vu.

The Anschluss of Austria into Hitler’s Germany in March 1938 and the annexation of Ukraine’s Crimea by Russia in March 2014 bear striking similarities. The Nazi occupation of the Sudetenland on the pretext of defending ethnic Germans living in Czechoslovakia and the Russian intervention in eastern Ukraine contain equally disturbing analogies.

Despite these ongoing humanitarian catastrophes, history gives us strength. We should stop for a moment and think about our heroes.

We should think about Nicholas Minue, a Ukrainian-American who singlehandedly destroyed several enemy positions while under fire near Medjez El Bab, Tunisia, until he was fatally wounded. He was awarded the Medal of Honour.

We should think about Ivan Kozhedub, a top Ukrainian and Allied forces fighter pilot who prevailed in 64 air battles during WWII.

I, personally, also think about my grandfathers who courageously defended my homeland until the very last days of the war. One of them, Ivan Poroshenko, fought all the way to Prague where he was seriously wounded. When peace came, he and millions of other Ukrainian soldiers humbly assumed life’s other responsibilities of being a great teacher, engineer and father.

Sometimes, the past and present appear to intertwine.

It is impossible to imagine how it feels to bury your own grandson, killed in an undeclared war at the hands of the grandsons of the men he fought alongside 70 years ago.

World War II taught us many bitter lessons. Our shared commemoration should not just be about our joint victory over Nazism.

This year we should think about what needs to be done to protect our shared values and to restore peace - shattered by Russia - in Europe, extend the peace-keeping effort and enhance the defensive capacity of Ukraine.

The tendency to ignore lessons of the past must be stopped before it is too late. 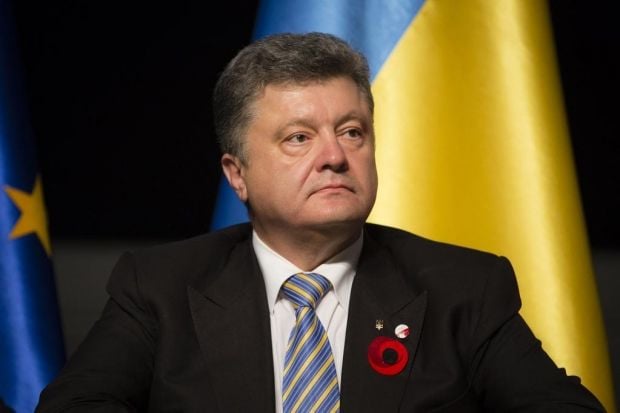 Photo from Twitter, @poroshenko
If you see a spelling error on our site, select it and press Ctrl+Enter
Latest news