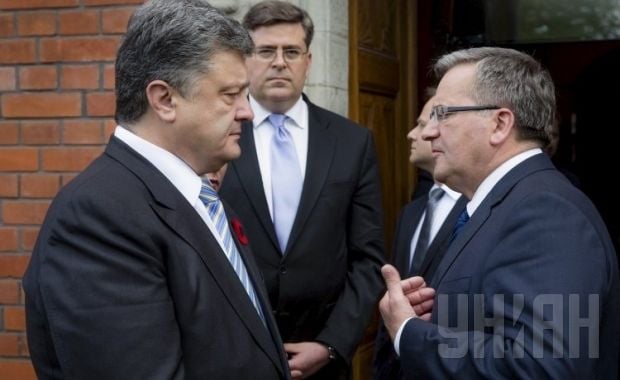 This was reported by the press service of the Polish president, referring to a telephone conversation between the heads of both states.

According to the statement, Poroshenko also told the Polish president about the "lack of real progress in implementing the Minsk agreement" and "the continuation of the tense situation in the Donbas."

At the same time, a statement posted on the Web site of the President of Ukraine only mentions that the two sides "exchanged views on the Eastern Partnership Summit in Riga."

Polish Foreign Minister Grzegorz Schetyna also said during a broadcast on Polish Radio that the chairman of the Verkhovna Rada of Ukraine Volodymyr Groysman had spoken of the need to amend the law "On the legal status and honoring the memory of fighters for Ukrainian independence in the 20th century" (No. 2538-1).

As UNIAN reported earlier, Komorowski said repeatedly that the Poles should understand the sentiments of the Ukrainian people regarding the OUN-UPA national organizations that fought for Ukraine's independence, but at the same time he pointed out that "the punishment for discussing the role of those organizations" as stipulated by the mentioned law would be harmful to the Polish-Ukrainian dialogue.