The document suggests taking measures to "reduce the likelihood of escalation of the conflict with the Russian Federation." 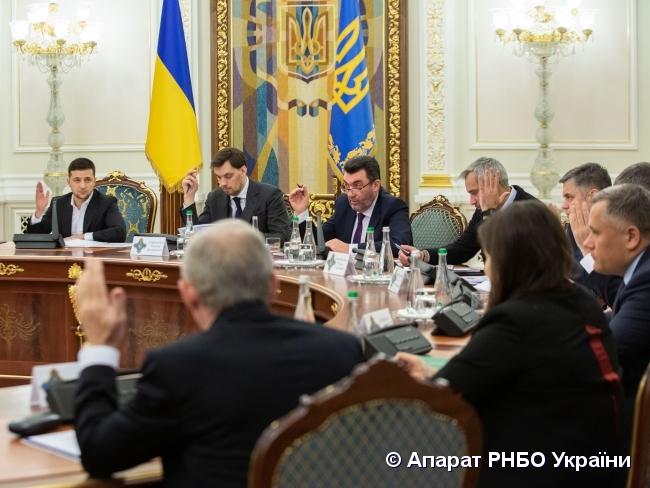 The meeting took place on Jan 17 / Photo from rnbo.gov.ua

The president said the meeting was advisory so that all NSDC members could express their opinions, comments and suggestions on the future document, the presidential press service said.

"I heard there are many different remarks. We have met now, we can discuss this strategy after the NSDC Secretary presents it," Zelensky said at the beginning of the meeting.

He suggested that all participants in the meeting elaborate the draft strategy within a week and submit their proposals. "And then we'll meet and approve the document," he added.

NSDC Secretary Oleksiy Danilov said that the draft National Security Strategy of Ukraine was developed in accordance with Article 26 of the Law on National Security of Ukraine. The document was based on the presidential election program, which was supported by the vast majority of the country's population. The National Institute for Strategic Studies, government bodies, civil society institutions, as well as foreign experts were involved in the preparation of the project.

Oleksiy Danilov emphasized that the key aspects of the strategy are a person, human life, health, honor, dignity, integrity and security. The ultimate goal of its realization is to promote a free, prosperous, safe, law-abiding country where everyone can exercise their talents and abilities.

"The strategy will be the basis for the development of other strategic planning documents in the fields of national security and defense that will determine the ways and instruments of their provision," the NSDC Secretary said.

Director of the National Institute for Strategic Studies Oleksandr Lytvynenko said that the draft strategy had been elaborated by an appropriate working group and presented, in particular, at NATO Headquarters in Brussels last December, where it received a commendable evaluation.

It is proposed to base its activities on three main principles: the development of defense and security capabilities that would prevent armed aggression against Ukraine by increasing the price of that aggression; the ability of society and the state to respond swiftly and adequately to changing security environment and to maintain sustainable functioning of their basic mechanisms; development of strategic relations with key foreign partners, first of all with the European Union and EU Member States, NATO, the United States, pragmatic cooperation with other countries and international organizations based on the national interests of Ukraine.

The priority areas of national security policy in the draft strategy are ensuring independence and state sovereignty, social development, first of all development of human capital, protection of rights, freedoms and legitimate interests of Ukrainian citizens, European and Euro-Atlantic integration (creation of necessary conditions for full membership in the EU and NATO), restoration of territorial integrity within the internationally recognized borders of Ukraine.

The realization of these priorities will be ensured through the restoration of peace and state sovereignty in the temporarily occupied territories of Donetsk and Luhansk regions, implementation of the complex of international legal, political, diplomatic, security, humanitarian and economic measures "Crimea is Ukraine".

"It is also proposed to take measures to reduce the likelihood of escalation of the conflict with the Russian Federation and tension in bilateral relations," the presidential press service said.

If you see a spelling error on our site, select it and press Ctrl+Enter
Tags:DonbasRussianAggressionstrategysecurityNSDCZelensky