The Ukrainian leader says the international community should unite and prevent any manifestation of anti-Semitism, xenophobia and racism. 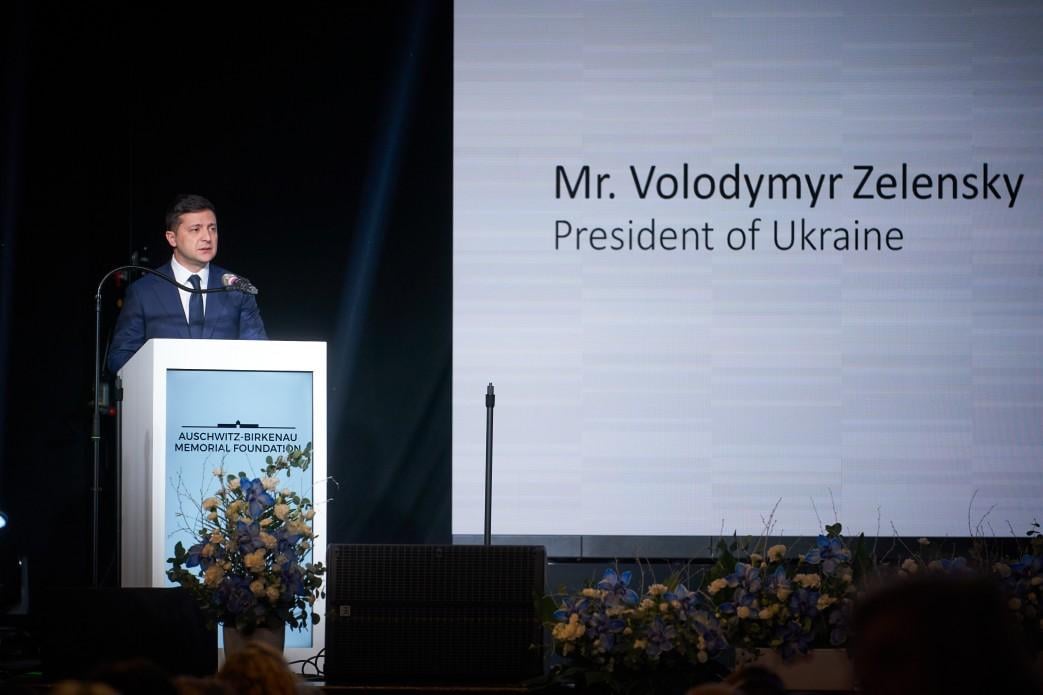 Zelensky has started his two-day visit to Poland / Photo from president.gov.ua

Ukrainian President Volodymyr Zelensky met with former prisoners of the Auschwitz-Birkenau Nazi concentration camp during the first day of his working visit to Poland.

He attended a dinner marking the 75th anniversary of the liberation of the German Nazi concentration camp; the event was attended by former prisoners of the camp and their families, the Ukrainian presidential press service said.

In his speech, he emphasized that it was an honor and responsibility for him to meet with those who had survived the Holocaust and concentration camp.

"Probably, humanity has not yet come up with words that could describe the indestructibility and strength of your spirit," he said.

Zelensky noted that the memoirs of Auschwitz prisoners, many of which are published in books, are very difficult to read because it is impossible to hold back tears.

"Most of these memories share the call: "Don't be silent!". One must speak about it. The younger generation must know these stories, know about the horrors of the Holocaust in order to never allow anything like this on the planet again," he said.

According to the president, even reading the memoirs of Auschwitz prisoners requires strength. Therefore, it is difficult to imagine what strength you need to have to endure the horror of the concentration camp.

"You did it! You are incredible people! Very strong and very brave. You inspire to never give up. The Holocaust is called the darkest period in human history. And you are the rays of the sun that overcame the darkness," he emphasized.

Zelensky noted that those memories were filled with pain, sadness, fear. At the same time – struggle, endurance, hope and immense human wisdom. After all, they contain the call to eradicate hatred as the greatest destroyer of human civilization.

"I am convinced that this is the number one task for every world leader today. The international community should unite and prevent any manifestation of anti-Semitism, xenophobia and racism. It must stand on the guard of humanism, tolerance and freedom. Stop evil before it becomes dangerous to humanity," he emphasized.

He also stressed that the Holocaust was a terrible tragedy for the Jewish people and a tragic lesson for mankind. He called for this page of history to be remembered and never to be repeated.

"This is our duty to millions of innocent victims, millions of Jews. It is our obligation to all future generations," he said.

Zelensky also noted the Righteous Among the Nations. Those who were not indifferent and risked their own lives to save Jews. "I am proud that more than two and a half thousand Ukrainians have been honored with this high title," the president said.

The Righteous were defined as non-Jews who risked their lives to save Jews during the Holocaust. Since 1963, a commission headed by a justice of the Supreme Court of Israel has been charged with the duty of awarding the honorary title "Righteous Among the Nations."

Zelensky started his two-day working visit to Poland on January 26. The agenda of the visit includes a meeting with Polish President Andrzej Duda.

If you see a spelling error on our site, select it and press Ctrl+Enter
Tags:PolandHolocaustZelensky