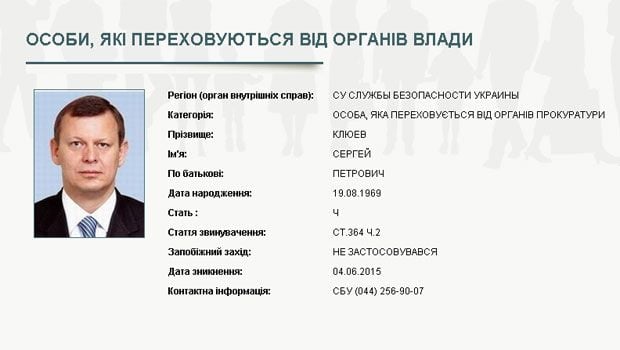 According to the report, Kliuyev is hiding from prosecution. The date of his disappearance is June 4.

As UNIAN reported earlier, on June 4, Kliuyev failed to appear for interrogation at the Prosecutor General’s Office.

On June 3, the Verkhovna Rada of Ukraine stripped incumbent MP Serhiy Kliuyev of his immunity from prosecution and agreed to his prosecution for several crimes.

Kliuyev tried to leave Ukraine on the same day, but the State Border Service of Ukraine stopped him boarding a flight to Vienna from Kyiv’s Boryspil International Airport.

As reported earlier, Kliuyev was charged with fraud and the misappropriation of property belonging to other people.