Poroshenko to Samantha Power: "You cannot imagine how famous you are in Ukraine" 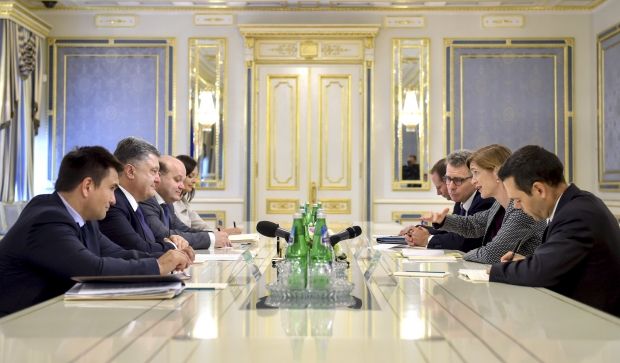 "You cannot even imagine how famous you are in Ukraine," Poroshenko said in jest while welcoming Power in Kyiv. He told her that many Ukrainians regularly watched broadcasts of UN Security Council meetings on Ukraine.

The president emphasized the importance of the UN Security Council's support for Ukraine and noted the high level of cooperation between Ukraine and the United States in the security sphere.

"Our greatest expectations on the implementation of the Minsk agreements are related to the support of the UN Security Council," Poroshenko said, referring to his meeting with UN Secretary-General Ban Ki-moon on May 8 when the parties discussed possible involvement of international peacekeepers in the Minsk Implementation Plan.

The president informed about Ukraine's strict compliance with its commitments under the Minsk agreements, particularly about attempts to initiate political process through free and fair local elections in Donbas and about regular violations by militants of the ceasefire in eastern Ukraine. According to him, when Russian-backed militants attacked Ukrainian troops in the town of Maryinka in Donetsk region on June 3, Ukraine was fully adhering to the Minsk agreements and managed to defend Maryinka, having demonstrated its responsible approach.

Poroshenko stressed the importance of retaking by Ukraine of the Ukrainian-Russian border and the resolution of the difficult humanitarian crisis in the occupied territories. The president also noted the importance of establishing the UN Office in Kyiv for the support of the Minsk agreements, which was agreed by Poroshenko during the meeting with Ban Ki-moon. In his words, this will help effectively complement the OSCE Special Monitoring Mission to Ukraine.

Poroshenko also said he was hopeful that coordinated efforts would help Ukraine become a non-permanent member of the UN Security Council and expressed gratitude to Samantha Power for her personal contribution to the defense of Ukraine's positions.

He said he hoped that the establishment of the UN Office in Ukraine would help the Organization receive first-hand information on the situation in the country. "Now, we are taking measures to beef up security along the line of contact [in Donbas]," he added.

Poroshenko also underlined the importance of solving the humanitarian problems of four million Ukrainians in the occupied territories who have turned to become militants' hostages.

Samantha Power in turn expressed support to the territorial integrity of Ukraine. She noted that the purpose of her visit was to examine the process of the Minsk Implementation Plan. She also arrived to facilitate the establishment of the UN Office on the maintenance of the Minsk agreements in Ukraine.

What is more, she stressed the importance of a "very powerful" recent statement by the Group of Seven on Ukraine.

Power praised Poroshenko's intention to visit Donetsk region on Thursday, June 11. She informed she had visited the places of residence of internally displaced persons (IDPs) from Donetsk region. In her words, she was really impressed the way ordinary Ukrainians got mobilized to help their countrymen in trouble.

She said she had visited many countries facing problems related to IDPs, but only in Ukraine she had seen such a strong volunteering movement.