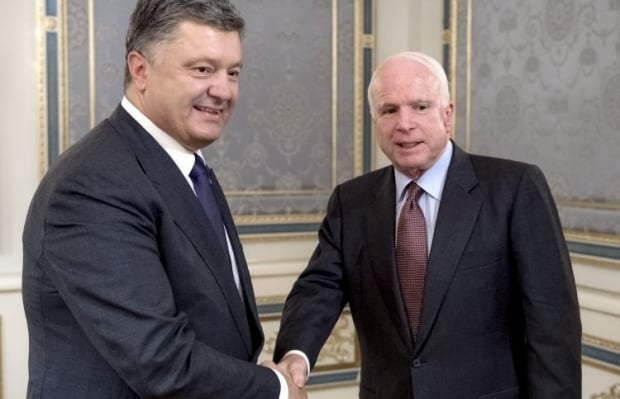 Poroshenko thanks the U.S. for its strong position and support of Ukraine / Photo from UNIAN

"We are fighting with weapons of the 20th century against weapons of the 21st century, because Russia supplies state-of-the-art armament to Donbas, using Ukraine as a testing range for its new samples of weaponry," he said, according to the presidential administration's press service.

The Ukrainian president briefed the U.S. senators about recent developments in eastern Ukraine, noting that Russian-backed militants do not observe the Minsk peace agreements, which leads to escalation in the conflict zone.

Poroshenko stressed that Ukraine had managed to build a strong army with high morale.

The Ukrainian leader thanked the U.S. for its strong position and support of Ukraine going through trying times, and noted the importance of Ukrainian-U.S. joint exercises.

He also welcomed a defense budget bill passed by the U.S. Senate, saying that this demonstrates that the U.S. can support Ukraine not only financially.

"The U.S. is together with us, not only with the financial, banking, economy support, through the IMF and on the bilateral basis, but also on the security," he said.

McCain in turn said he was visiting Ukraine to reaffirm support for the country's independence, sovereignty, and territorial integrity.

The U.S. senator informed that he had already met with volunteer organizations. "It was very, very impressive. I don't think many people in the world know that Ukrainians are willing to fight for freedom, they have fought for freedom and they will fight," John McCain said.

The meeting was also attended by Senators John Barrasso and Tom Cotton. The Ukrainian side was represented by Secretary of the National Security and Defense Council Oleksandr Turchynov, Minister of Foreign Affairs Pavlo Klimkin and Deputies of the presidential administration's head Valeriy Chaly and Andriy Taranov.

As UNIAN reported earlier, the U.S. Senate on Thursday passed a $612-billion defense policy bill, over White House objections, which allots $300 million worth of military aid to Ukraine, including radars and anti-tank weapons.