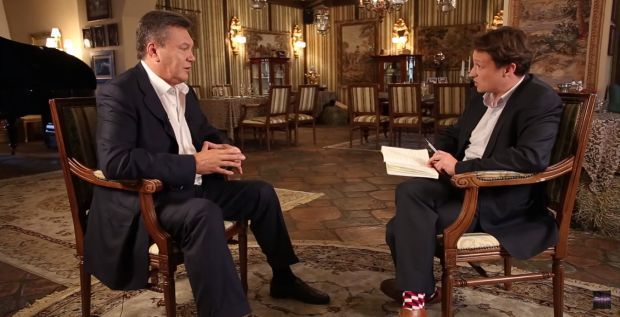 "I don't deny my responsibility," he told the BBC’s Newsnight program, when asked about the shooting of demonstrators in Kyiv's Maidan Square.

He never ordered the security forces to open fire, he said, but admitted he had not done enough to prevent bloodshed.

It is his first Western media interview since the conflict in eastern Ukraine erupted last year.

"I did not give any orders [to use firearms], that was not my authority… I was against any use of force, let alone the use of firearms, I was against bloodshed,” Yanukovych said.

"But the members of the security forces fulfilled their duties according to existing laws. They had the right to use weapons.”

More than 100 protesters died in the clashes on Kyiv's central square, where huge crowds had confronted police for months.

A year after the bloodshed some witnesses told the BBC that fatal shots had also been fired at the police.

In February 2014, Yanukovych was whisked away by Russian special forces to a safe haven in Russia.

Yanukovych told the BBC that the war was a "nightmare" that had become a reality.

Russia's annexation of Crimea was a "tragedy", which would not have happened on his watch, he said.

"What happened there was very bad. And we need, today, to find a way out of this situation... Now there is war. They talk about getting Crimea back. How? By war? Do we need another war?"

He denied allegations that he had embezzled funds from the Ukrainian state and was hiding money in foreign bank accounts.

His opulent residence outside Kyiv, thrown open to public gaze by protesters after he fled, did not belong to him personally, he said.

Receipts detailing millions of dollars spent on the complex were, he said, "political technology" and spin. The ostriches in the residence's petting zoo, he maintained, "just happened to be there".

"Yes, there was corruption, no one denies that. But a year and a half has passed, those in power have all the means at their disposal. Show us, where are the bank accounts of Yanukovych? They don't exist and never have done."

Interpol placed him on a wanted list in January this year, as Ukrainian officials accuse him of embezzling millions of dollars.

He said Russian President Vladimir Putin had saved his life by ordering special forces to bring him to Russia on the night of 23 February 2014.

"The fact that Vladimir Putin took that decision, on the recommendation of his own special forces that was his right and his business. He did not consult me.

"I am of course grateful to him for giving the order and helping my security to get me out, and save my life," he said, adding that he believed his life was still in danger.

He said he still hoped one day to be able to return to Ukraine.

The Donbas region - much of which is now controlled by separatists - should remain part of Ukraine, he said, urging the United States and the European Union to force Kyiv to negotiate directly with the rebel leaders.

"I warned that they would not stop at Maidan - that they would go further. And they went further… They've broken up the country. They've drawn the whole world into this conflict."