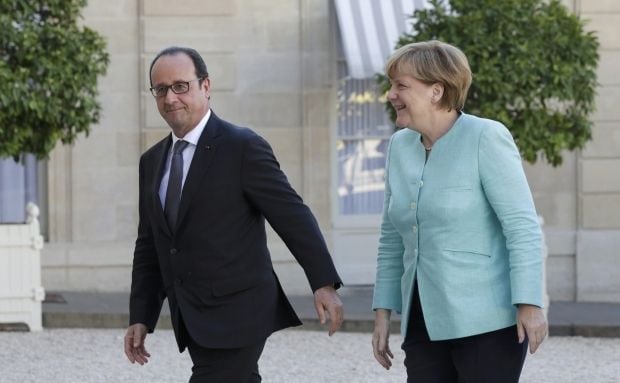 The leaders held a telephone conversation for the first time since April 30, 2015.

The four countries agreed on a package of measures last February dubbed "Minsk II" and aimed at ending military tensions in the former Soviet state, according to Reuters.

"This dynamic needs to be maintained to ensure the Minsk measures are fully effective by the end of this year", the French presidency said in a statement.

"These political steps must go along with the strict respect of the commitments made by all parties regarding security", the statement said.

In turn, Poroshenko said that Ukraine, unlike Russia, complied with the Minsk agreements and stressed the need for "unconditional and immediate release of all the hostages, including Oleh Sentsov and Nadia Savchenko," according to the president’s press service.

Participants in the Normandy format dialogue also demanded to urgently withdraw tanks and light weapons from the demarcation line in Donbas, to take measures for demilitarization and demining of territory near the village of Shyrokyne, as well as to ensure the smooth operation of the OSCE SMM monitors.

Russian President Vladimir Putin during the dialogue "once again said that an important condition for the settlement was the establishment of a direct dialogue between the Kyiv authorities and representatives of the Donetsk and Luhansk People’s Republic militant organizations, including within the framework of the Trilateral Contact Group," the Kremlin press service said.