And prepared an award for Kolesnikov

Interior Minister Yuri Lutsenko prepared an award for Borys Kolesnikov. He said this to B.Kolesnikov and R.Akhmetov in presence of journalists in Donetsk, at Shakhtar stadium, where they were waiting for President of Ukraine Victor Yushchenko. 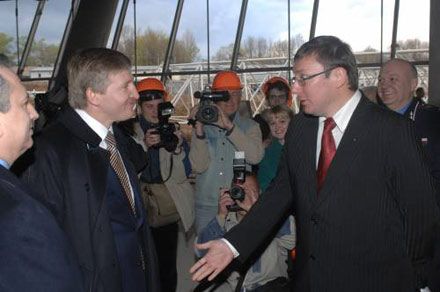 According to Ostrov correspondent, Lutsenko’s visit was unexpected for Akhmetov and Kolesnikov. At the meeting, the Minister embraced and kissed Akhmetov, and shook hands with Kolesnikov.

“I have a very precious award for you. I did not know that you would be at the stadium. But it is waiting for you in Kyiv. I will for sure present it to you”, the Minister said to B.Kolesnikov.

Earlier B.Kolesnikov has many times accused Yuri Lutsenko of organizing falsification of the criminal case, on which B.Kolesnikov spent three months in a pre-trial jail in Kyiv.