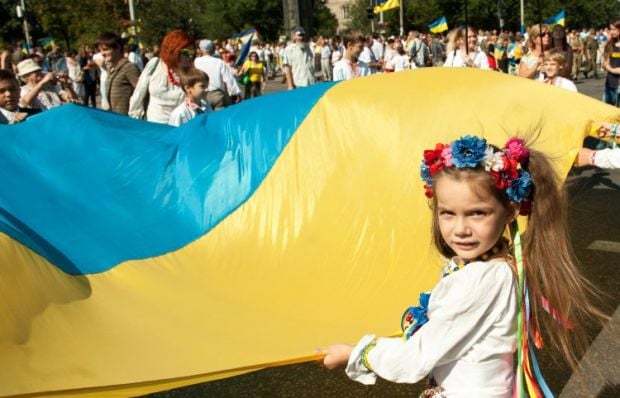 Ukraine celebrates its 24th anniversary of Independence / Photo from UNIAN

U.S. President Barack Obama congratulated President of Ukraine Petro Poroshenko and the people of Ukraine on the 24th anniversary of Independence.

"The United States has been a steadfast partner and friend of Ukraine since your Parliament approved the Act of Independence on this date in 1991. For two dozen years, we have supported the efforts of your citizens to build a strong, stable, and democratic country," reads U.S. Secretary of State John Kerry's statement on behalf of President Obama and the American people.

"Despite huge challenges, you have made remarkable strides toward this goal. You have stood up to a despotic regime, a corrupt bureaucracy, and an aggressive neighbor—all in the name of a free, democratic, and prosperous future," the statement said.

"Your resilience has won you friends and admirers the world over, including the United States. America is particularly supportive of Ukraine's firm commitment to internal reform," it said.

The U.S. party is sure that the friendship between the two countries will continue to grow. "Together, we will seek an end to conflict and bloodshed through full implementation of the Minsk Protocols. And together, we will ensure that Ukraine is free to continue the important work of strengthening its political, economic, and cultural institutions," the statement said.

In his greetings on the occasion of Ukraine's Independence Day, President of France Francois Hollande also assured of his support for the restoration of sovereignty and territorial integrity of Ukraine.

What is more, Hollande wished Ukraine peace and prosperity.

"At the time when our two countries established close partnership for the resolution of the conflict, which tears the east of Ukraine apart, I would like to reaffirm the commitment of France and the entire EU to the independence, sovereignty and territorial integrity of Ukraine within the borders recognized by the international community," the French president said.

President Poroshenko also received a letter from Pope Francis, who greets Ukraine and Ukrainians with the 24th anniversary of Independence.

"I pray for your country in this difficult situation renewing my spiritual affinity with victims, their families and all those who suffer. I support the efforts that help the Ukrainian nation move forward in the spirit of peace and reunification," he said.

President of the People's Republic of China Xi Jinping also sent Poroshenko his greetings on the occasion of the Independence Day of Ukraine, wishing Ukraine prosperity, might, happiness and peace.