Yeliseyev: Ways are sought to press on Moscow to withdraw weapons of under 100mm caliber

President of Ukraine Petro Poroshenko, French President Francois Hollande and German Chancellor Angela Merkel discussed the urgent need to reach an agreement on the withdrawal of under-100mm caliber weapons from the line of contact in the Donbas, according to Deputy Head of the Presidential Administration of Ukraine Kostyantyn Yeliseyev. 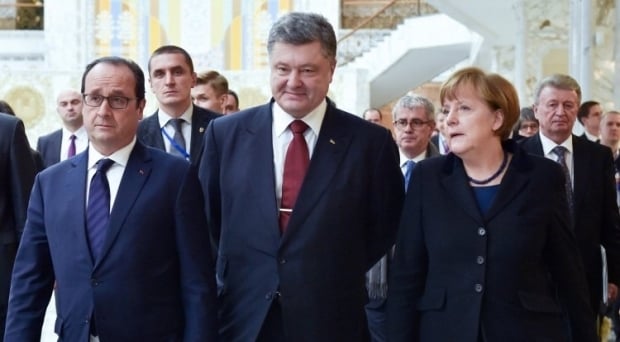 "This issue has been discussed, and, again, the parties considered ways of “pressuring” Moscow to ensure the implementation of said agreement. We have to do it as soon as possible," said Yeliseyev at a briefing on Tuesday.

Read alsoYeliseyev: EU may extend sanctions against some Russians in September“We have voiced our position clearly. We hope that in the near future, a detailed discussion of the draft agreement and all of its components will take place within the framework of appropriate formats," he said, answering the question of an UNIAN correspondent.