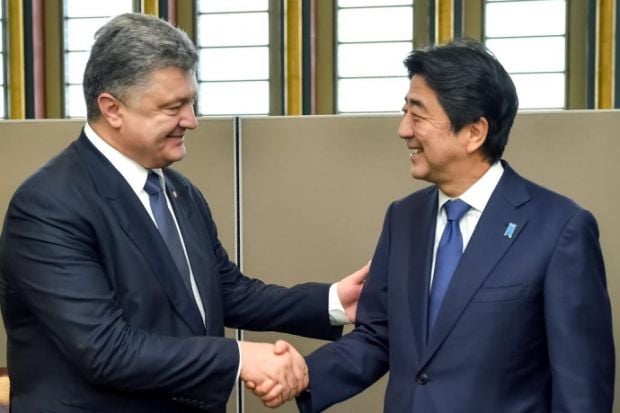 “Japan will not recognize the results of pseudo-elections should they be held,” Shinzo Abe noted, adding that there was no alternative to the Minsk agreements, according to the report.

The Prime Minister of Japan praised the efforts of the Ukrainian President aimed to peacefully resolve the situation in the east of Ukraine, while Petro Poroshenko thanked the Japanese Prime Minister for the large-scale financial aid of Japan aimed to stabilize the economic situation, implement reforms and important infrastructure projects in Ukraine.

Poroshenko informed the Prime Minister on the completion of internal procedures in Ukraine necessary for the intergovernmental agreement signed on June 6 during Abe’s Kyiv visit on the provision of $900 million loan for the project of modernization of Bortnychi aeration station to enter into force.

“The Ukrainian party expressed interest in attracting Japanese capital in the economy of Ukraine in the context of the key intergovernmental Agreement on promotion and mutual protection of investments,” reads the statement. “The parties also discussed the issue of strengthening the energy security of Ukraine and praised the development of cooperation between Ukraine and Japan in overcoming consequences of accident at the nuclear power plant Fukushima-1.”

Read alsoJapan lends Kyiv UAH 18.3 bln for sewage aeration stationPetro Poroshenko and Shinzo Abe have also discussed cooperation between Ukraine and G7 countries in the context of Japan’s presidency in the given organization starting from January 1, 2016. The parties agreed on the visit of the Ukrainian President to Japan in 2016.