CEC chief: Only Parliament should create mechanism for elections in Mariupol, Chervonoarmiysk 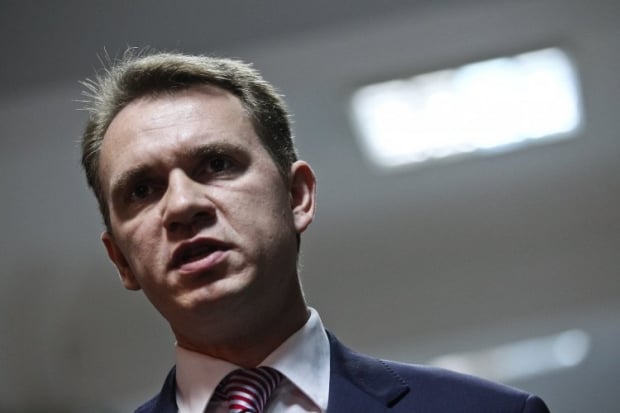 The statement was voiced at Okhendovsky’s Sunday meeting with U.S. Ambassador to Ukraine Geoffrey R. Pyatt, Canadian Ambassador Roman Waschuk and Ambassador of Great Britain to Ukraine Judith Gough. The event was also attended by Director of the International Foundation for Electoral Systems (IFES) in Ukraine, Peter Erben.

As Ambassador Payatt noted at the beginning of the meeting, the CEC has once again confirmed the high level of competence, professionalism and impartiality throughout the preparatory process for the local elections on October 25, 2015. However, the U.S. Ambassador has expressed concern that the vote did not take place on October 25 in the city of Mariupol and in the town of Chervonoarmyisk in Donetsk region.

Read alsoDonetsk regional administration: Local elections in Mariupol cancelledIn response, Okhendovsky noted that the CEC deemed fundamentally important, from the beginning of the election process, to organize elections in Mariupol, given that it is the largest government-controlled city in Donbas in terms of the number of voters, where the rule of law, established by the Constitution of Ukraine and the Ukrainian laws, is enforced. The CEC chief explained the disruption of the vote in Mariupol and Chervonoarmiysk with systemic wrongful inaction of individual members of municipal election commissions, who refused to hand ballots over to 213 precinct election commissions in Mariupol and 37 PEC in Chervonoarmiysk. He noted that the legality of the decision to print voting ballots for Mariupol elections  was established not only by the CEC, but also by a court ruling which has entered into force.

In another case, in Chervonoarmiysk,according to a court ruling, issued five hours prior to the vote, the decision of the municipal election commission was overturned on determining the manufacturer of voting ballots on a sole ground that an individual entrepreneur had been chosen for printing ballots, instead of a legal entity. Similar decisions were taken by many other territorial election commissions. Their legality was not questioned in other cases. The ballots printed in Chervomoarmiysk fully comply with the requirements of the law. Despite this, the ballots, even being obtained by the town’s election commission, were not transferred to precinct election commissions.

In both cases, the CEC requested the law enforcement agencies to provide further legal assessment of socially dangerous consequences of illegal inactivity of individual members of the relevant municipal election commissions. The CEC suggests such inaction be evidence of a criminal offense under Article 157 of the Criminal Code of Ukraine.

According to Okhendovsky, the law on local elections does not provide for the exact protocol of actions of election commissions in such situations. Consequently, only the Verkhovna Rada of Ukraine should establish a special legal mechanism to give the voters in Mariupol and Chervonoarmiysk  the opportunity to exercise their voting rights.

Read alsoTuka: No significant events that could affect elections in Luhansk region"Any election process that has already begun, must be completed with voting and election results. Disruption of the vote due to a wrongful inaction of individual members of municipal election commissions has not changed the legal status of the candidates who have been nominated for the respective elections. At the same time, there is no legal possibility to complete the launched electoral process without an actual vote and the election results," he said.

This position was supported by all the attendees to the ambassadors present at the meeting, who stressed that such approach is fully consistent with international electoral standards, as noted by the CEC’s press service.

Okhendovsky also said that there were some violations of the nominees’ passive voting rights by the territorial commissions, which wrongfully denied some of them registration. Some TECs even systematically refused to fulfill the court rulings, which obliged them to register candidates, and also the decision of the CEC, itself. Having the statutory authority to cancel unlawful decisions of the TECs and personally address such issues, the CEC, in some cases, requested registration applications of candidates and registered them upon own decisions.

Responding to one of the questions, he also focused on the problems that require a solution in the context of preparations for the forthcoming elections in certain areas of Donetsk and Luhansk regions. In particular, he talked about the preconditions which must be followed to hold the elections in accordance with the Ukrainian legislation and international electoral standards.

"It is obvious that the forthcoming local elections in some regions of Donbas will have their own specific character, which is not peculiar to the rest of the territory of our state. We are dissussing the need to draft and adopt special legislation, which will be an adequate instrument for the resolution of all these specific issues. It will be the law of one-time use, the so-called ad-hoc law. I wish that the suggestions and the experience of the CEC be taken into account when the bill is drafted," said Ohendovsky.

The two sides also exchanged views on possible options for the participation of internally displaced persons in the upcoming local elections in some regions of Donetsk and Luhansk regions.

As UNIAN reported earlier, on October 25, first deputy chairman of the Bloc of Petro Poroshenko faction, head of the  electoral headquarters of Solidarity, Ihor Kononenko, said that the Verkhovna Rada is expected to pass in early November a bill that will provide for holding the elections in Mariupol and other cities on November 15.