U.S. Assistant Secretary of State for European and Eurasian Affairs Victoria Nuland says the United States must maintain pressure on Russia for completing the unfinished commitments under the Minsk peace agreements on Donbas, according to a statement posted on the website of the U.S. Department of State. 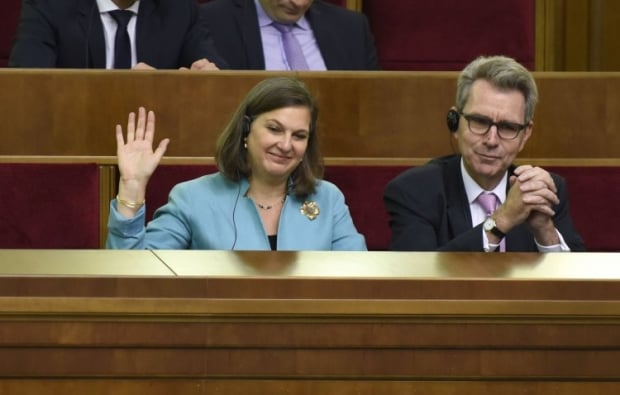 The United States has given political, economic, and security support to Ukraine / Photo from UNIAN

"Now we have to help Ukraine see it through. We must maintain pressure on Russia and its separatist proxies to complete the unfinished commitments of Minsk, including: the return of all hostages; full humanitarian access for UN agencies, NGOs, and government relief agencies; free, fair elections in Donbas under the Ukrainian constitution monitored by ODIHR; the removal of all foreign forces and weapons; and the return of the international border to Ukraine," Nuland said at the Berlin Security Conference on November 17.

"Sanctions are an essential tool for holding Russia accountable: they must be rolled over until Minsk is fully implemented. And we must keep our Crimea-related sanctions in place until Russia returns the peninsula to Ukraine," she said.

In her words, the United States has given political, economic, and security support to Ukraine and imposed successively harsh rounds of sanctions to bring Russia to the negotiating table. "And we supported a diplomatic resolution to the conflict via the Minsk agreements and the Normandy talks led by Germany and France," she said.

In her words, the best antidote to Russian aggression and malign influence is Ukraine's success as a democratic, prosperous, European state, the Ukrainian government must continue to live up to its promises to its own people and maintain the trust of the international community.

"Much difficult work remains to clean up endemic corruption throughout government and society, at every level; to stabilize the economy; break the hold of corrupt state enterprises and oligarchs; and reform the justice system. But, the will is there. Ukraine's own people are demanding a faster pace of change. We help them most when we make clear that our own sustained support depends on Ukraine continuing to clean up its own house," she said.

"As NATO Allies, we are also supporting those countries on the Alliance's Eastern edge that worry they could be the Kremlin's next victims," she added.