Poroshenko: Only our joint efforts can efficiently counter terrorism 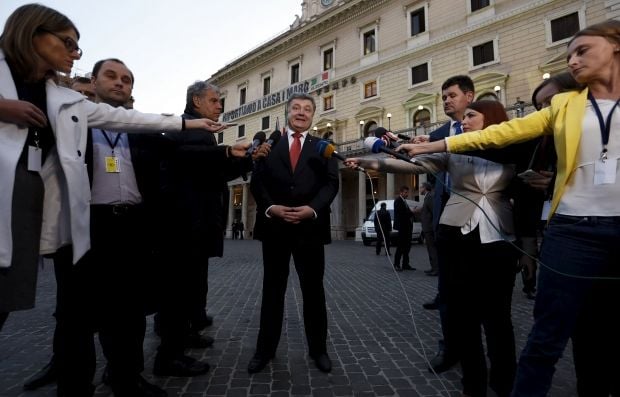 "I was impressed by Frenchmen singing La Marseillaise and writing: 'We are not afraid.' It is the way Europe should go. We are together in a single anti-terrorist coalition," the Head of State said.

The Head of State emphasized that Ukrainian citizens were also fighting against terrorists and countering Russian aggressor.

Read alsoSteinmeier: Russia focusing efforts in Syria, taking attention away from Ukraine"Ukrainians pay huge price for this aggression and these terrorist attacks. Thousands of Ukrainian civilians and servicemen died because of war. However, Ukrainians keep fighting for democracy and the European path has become a national idea," Poroshenko emphasized.

The Head of State emphasized that the world should unite in the fight against terrorism. "Strong and efficient unity can protect us from terrorism. Weak unity will mean the victory of terrorism," he said.

Answering the question whether Russia's involvement in the fight against terrorism in Syria will affect Ukraine, the President noted that there was no Russia's involvement, because Russia supported Assad's regime. There will be an opportunity for discussion, if Russia changes its tactics and directs efforts to the struggle against ISIS.

Read alsoObama calls on Putin to withdraw troops from Ukraine"We have a clear signal from many leaders of G20 Summit in Antalya – coordination of actions in Syria doesn't mean softening of positions on Minsk. Russia must fulfill the Minsk agreements completely. Otherwise sanctions will be continued or there will be new sanctions if the situation becomes worse," Poroshenko emphasized.

"My main message today – let us unite. I count on global solidarity with Ukraine. Let us unite in our global struggle against terrorism," the President said.